Hello again!! Continuing our review of the Nendoroids from Wagnaria, we have our 2nd waitress: the adorable but androphobic Inami Mahiru-chan!~ 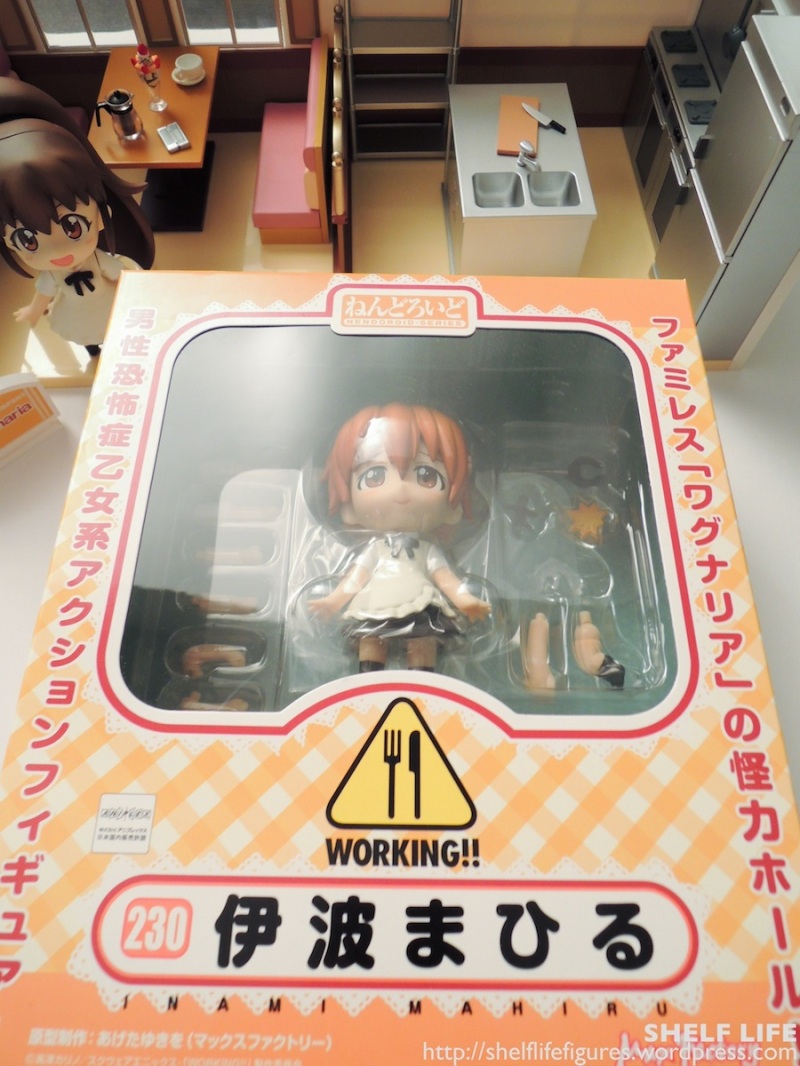 Here she is in her box. Again, it’s covered in a checkered tablecloth pattern and lace. But this time it’s orange, just like the colour of Inami’s hair.

Annd her blister and all her parts! Like Popura, she comes with lots of extra arms and two extra faces. Her accessories include punching effects and the gripping type object Takanashi uses to hold her with. I’m a bit saddened that the stand and base are taking up almost 1/4 of the blister when it could’ve been used for more parts. (;¬_¬)

She is also the first Nendoroid I’ve had that had tape on every side of her blister as well as a twist-tie holding the whole thing together!

Here is Inami out of her box! Her default face is a smiling yet shy expression. I think it suits her perfectly!

Here’s a close-up of her uniform. Can you see what the difference is between her and Popura-chan? (>▽<) 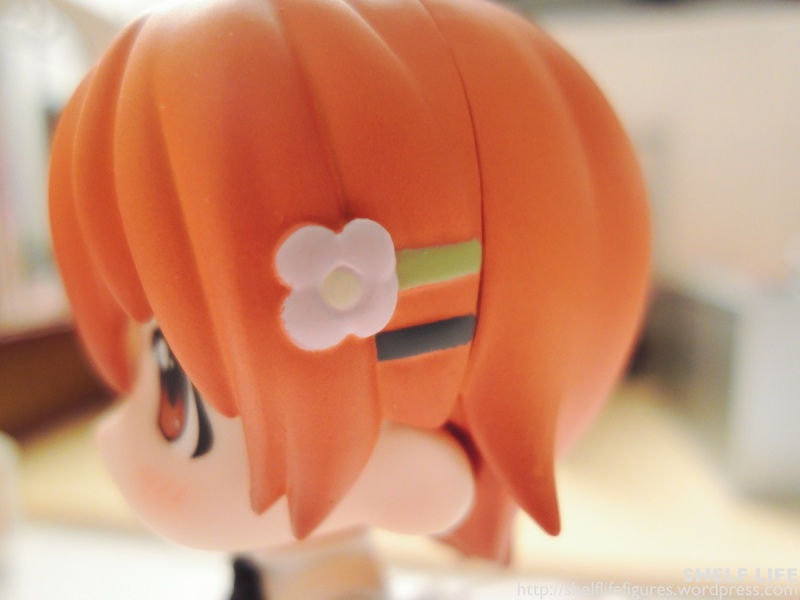 And a close up of her hairclip! Mine wasn’t painted very well unfortunately. Inami eventually starts wearing a different hairclip on each episode of the anime, so I think it would’ve been a nice bonus if the ornament part of the hairclip was removable and could be replaced with different parts. Kind of like Tomoe Mami’s hair accessory.

With her extra bent arms (arms 5 and 6 from the top), we can recreate our shy Inami-chan even more! You can use the arms to cover her smile to create different shy expressions. 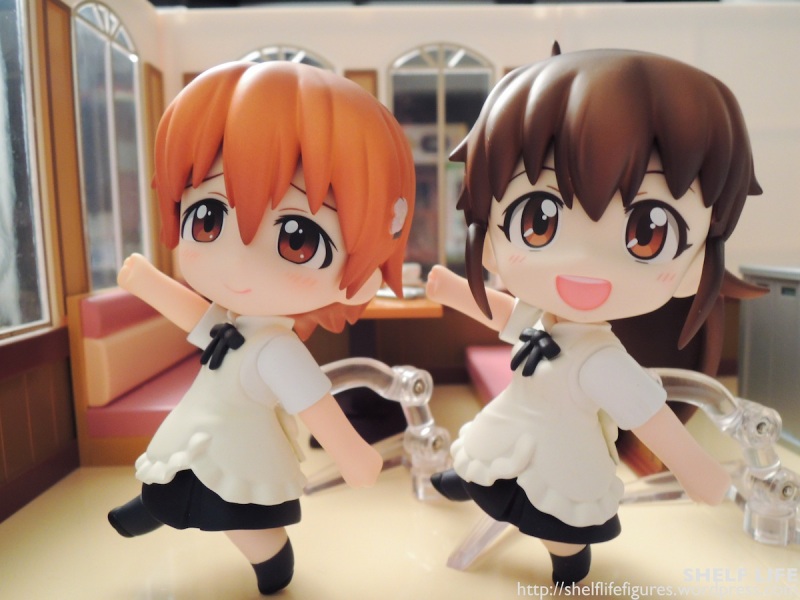 The first two extra arms in the blister are straight arms with fists. They are pretty much like the straight arms on Popura, so you can also create the pose from the Popura army for an Inami army! These fists are different from fists 3 and 4, which have holes in her hand for attaching accessories. 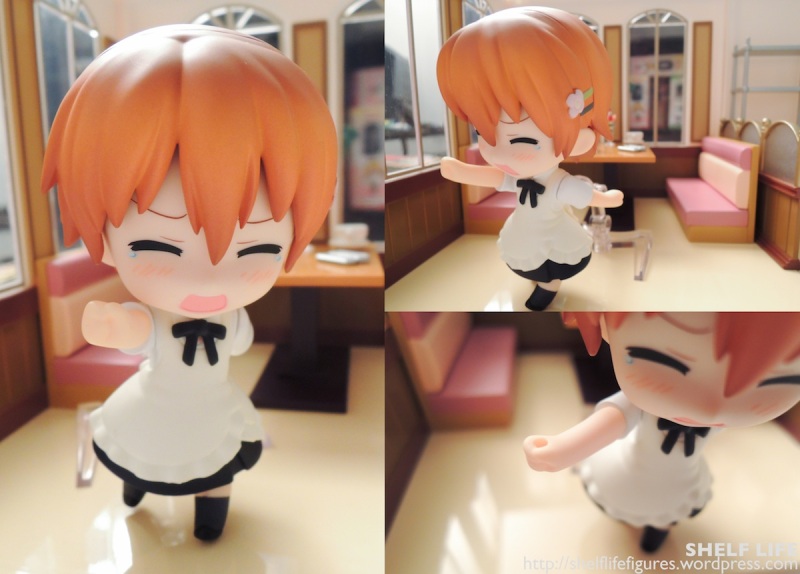 Inami’s second expression is a screaming one. Inami is scared of men. so she usually makes this face when she’s about to punch someone. This is when arms 3 and 4 come in handy!

With the hole in the fist, you can attach a punch effect part to make it look like she’s really punching! o(-`д´- ｡) 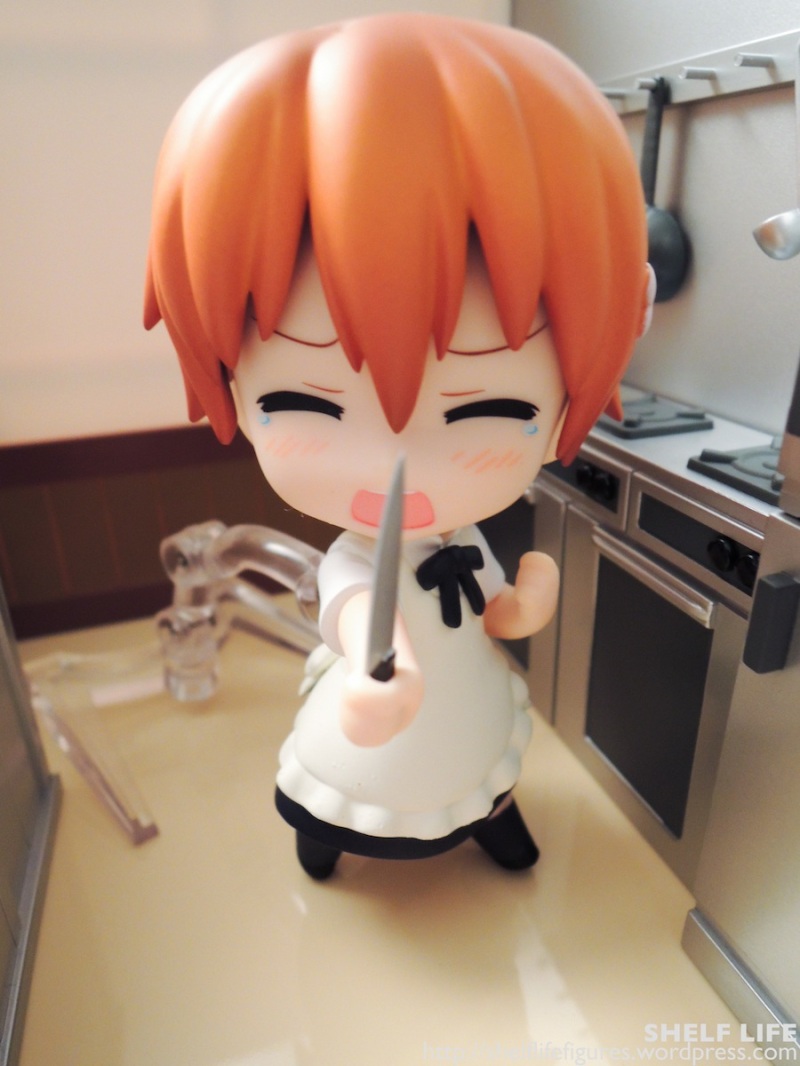 Something I found funny was that the kitchen knife that came with the Wagnaria playset B fits perfectly in her hand!

She also comes with a special huge fist arm (located on the right on the blister) for a super punch!

WIth the hole, there’s a special effects part for the punch to recreate all the times Inami has knocked-out Takanashi-kun. I’m pretty sure that little black silhouette is supposed to be him. (That doesn’t mean you shouldn’t give us the real Takanashi Nendoroid though, GSC!)

And finally, Inami’s last face plate is a super embarrassed expression! Gahhh I just want to hug her >_<

Here’s the grippy type object I was mentioning before. Since Takanashi is male, he has to use this to hold and grab onto Inami to help her overcome her fear. As for why she’s embarrassed to hold it… well you can follow the series to find out!

A few last things I wanted to mention.. my Inami was unfortunately not of the greatest quality. First, the hairclip wasn’t painted fully. The punch effect and the silhouette part actually don’t stay together on mine (I had used putty for the picture). Here, you can see her socks are painted rather messily and smudged. 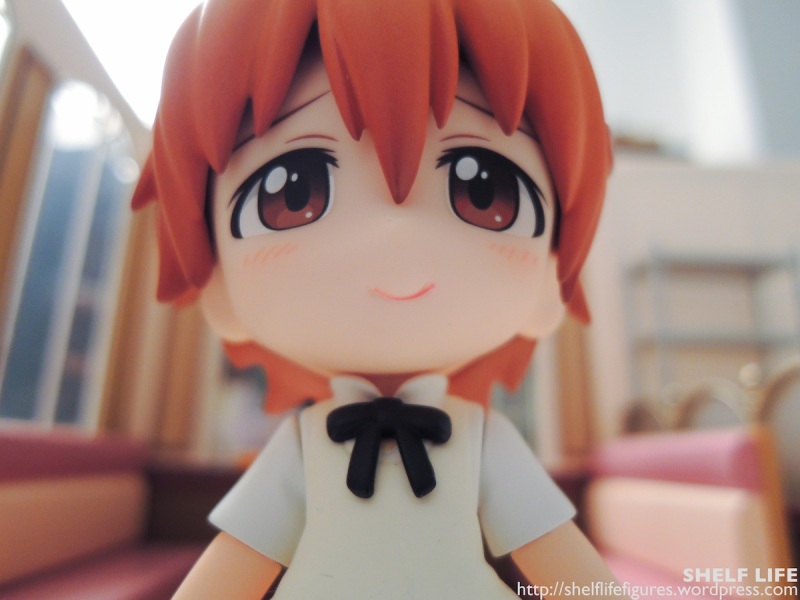 The thing that disappoints me the most was that her mouth is not aligned on this faceplate! It kind of gives her a derpy face sometimes. Boo. Oh well, I guess things like this happen.  I just hope these problems aren’t consistent.

Overall, I really like this Nendoroid just because of how adorable she is, making me overlook all the small problems. If you’re a fan of Working!! I don’t think you’ll regret getting her. Because of Inami, I really hope that Good Smile Company decide to release Takanashi as well. After all, we need someone to hold the other end of the grippy hand.