Hi again~ We have another review today! ヾ(＾∇＾)

Just a heads up – due to the nature of this Nendoroid, there are mild spoilers contained in this review, so please proceed at your own risk~!

Now on with the review! 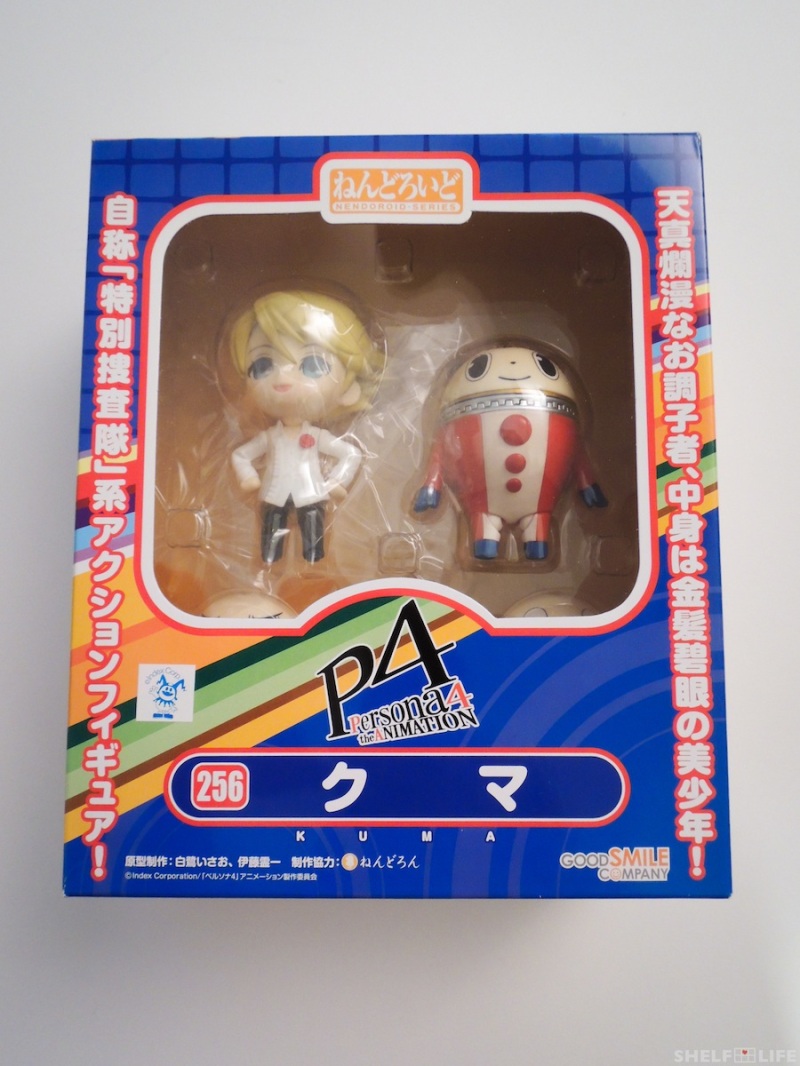 From the rpg/anime Persona 4.. here is our cuddly bear mascot Kuma~! Or Teddie as he’s known outside of Japan.

Kuma’s Parts and Accessories~
Kuma doesn’t come with a whole lot of extra parts, but as you’ll notice, both versions of Kuma is included – the regular bear-suit with customizable parts as well as  a full-sized Nendoroid of his human alter ego!

Kuma’s side! He has a little ball for a tail, and from this side, you can see the tab for the zipper for attaching his head. This zipper is not movable, so be careful not to break it!

Kuma’s back side. I’m a little disappointed at the small marks on the back of his head, but luckily it’s nothing big. Heehee, look at his little fuzz on top of his head.

Kuma comes with two stands: one for his bear-suit form, and one for his human form. They both use the standard square base, but the bear-suit stand’s attachment is slightly different to suit the curvature of his body.

Curved like this!
This is what it looks like attached~ There’s unfortunately a little paint muck-up on my zipper. 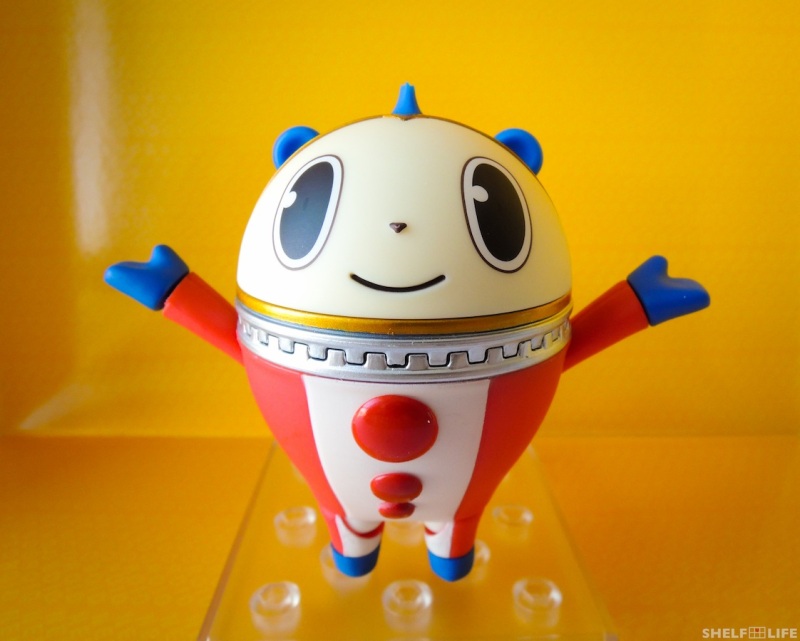 Welcome to the TV World! ＼（＾‿＾）／
Kuma’s arms are attached by a standard peg, so they can be rotated and replaced by other parts. His hands are also removable from the arm itself. 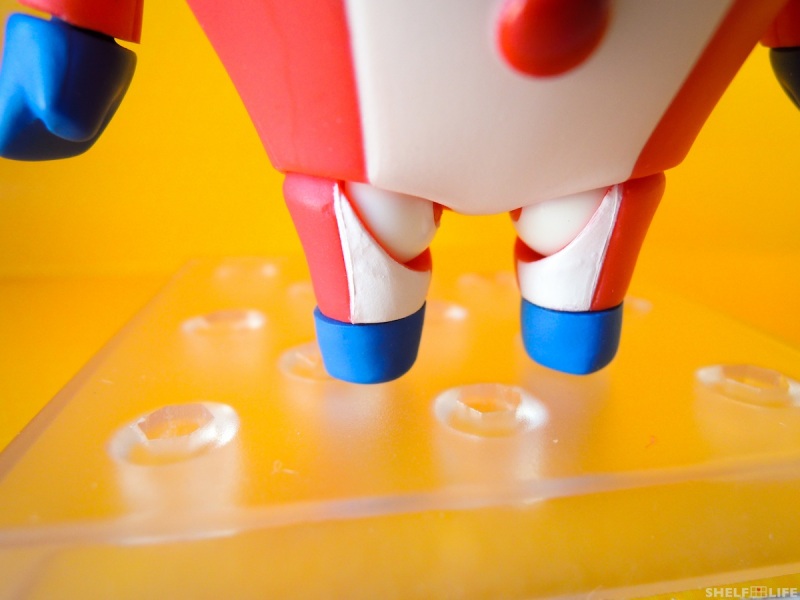 His legs are attached by the standard Nendoroid leg joint to allow some movement forwards and backwards. His feet can also be detached from his leg. 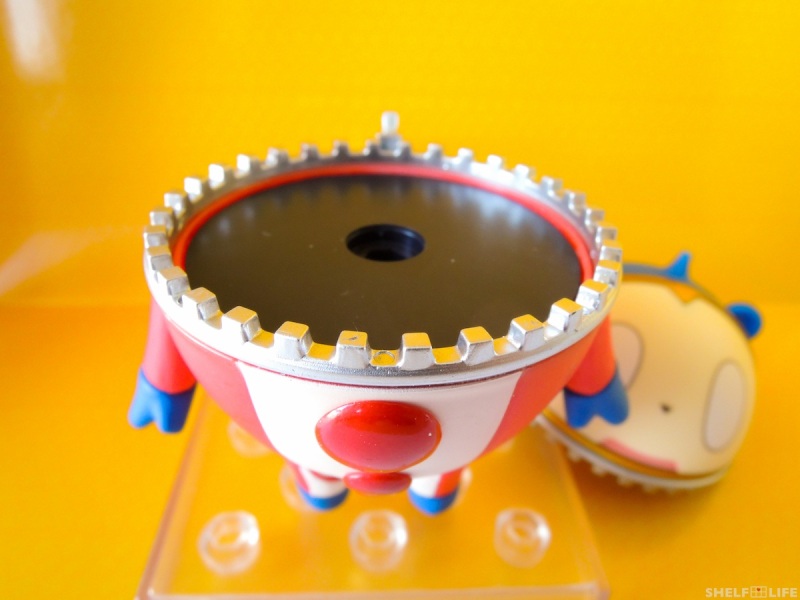 Here’s Kuma’s head! The peg on the right is used to attach his head to the hole you saw earlier in his body.

The underside of his head! The peg attaches like this. I love how they did the teeth of the zipper. Everything is clean and uniformly-spaced. Not only does it make the zipper look awesome, but…

…Kuma can also turn his head!! Not just left and right, but the whole 360 degrees!

Kuma comes with 3 extra faceplates, and this is how they are attached to his head.

Let’s start taking a look at his extra parts now~

ᕙ( `皿′ )ᕗ
The first extra faceplate is the angry expression! He also comes with two flexed arms to make him look intimidating~ 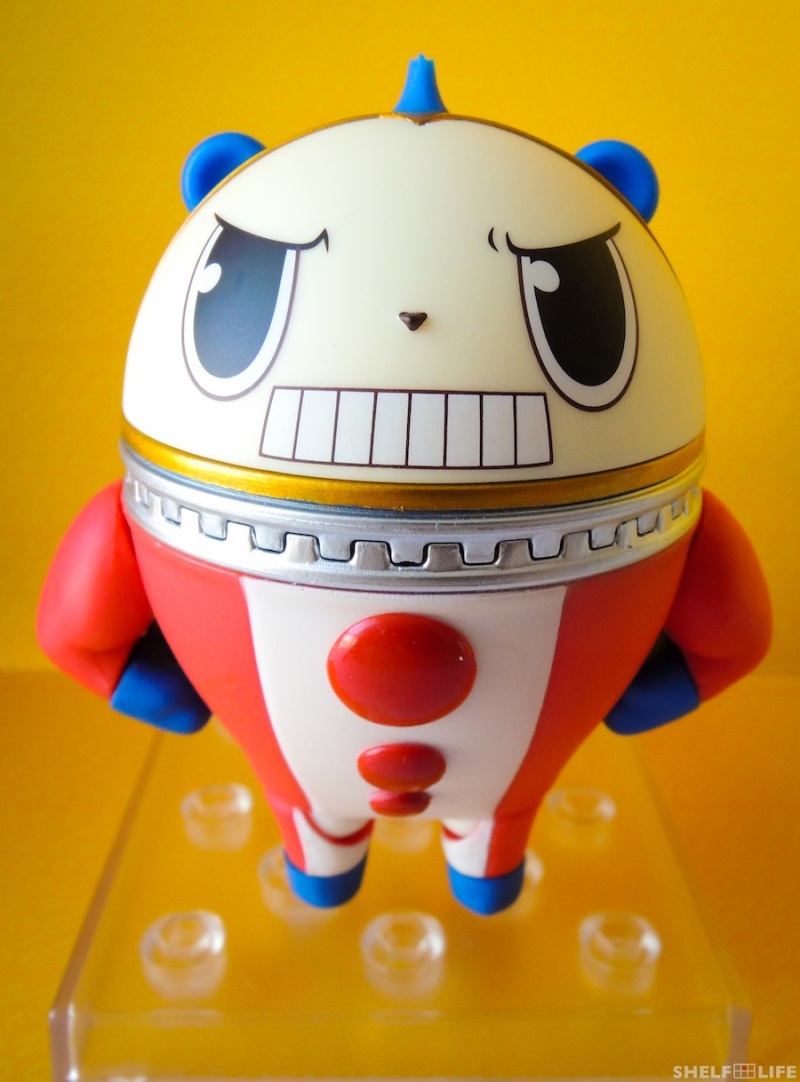 Or you could put them down to his hips. Hehe, he reminds me of Superman.

Or maybe you’d rather have him showing off his muscles? 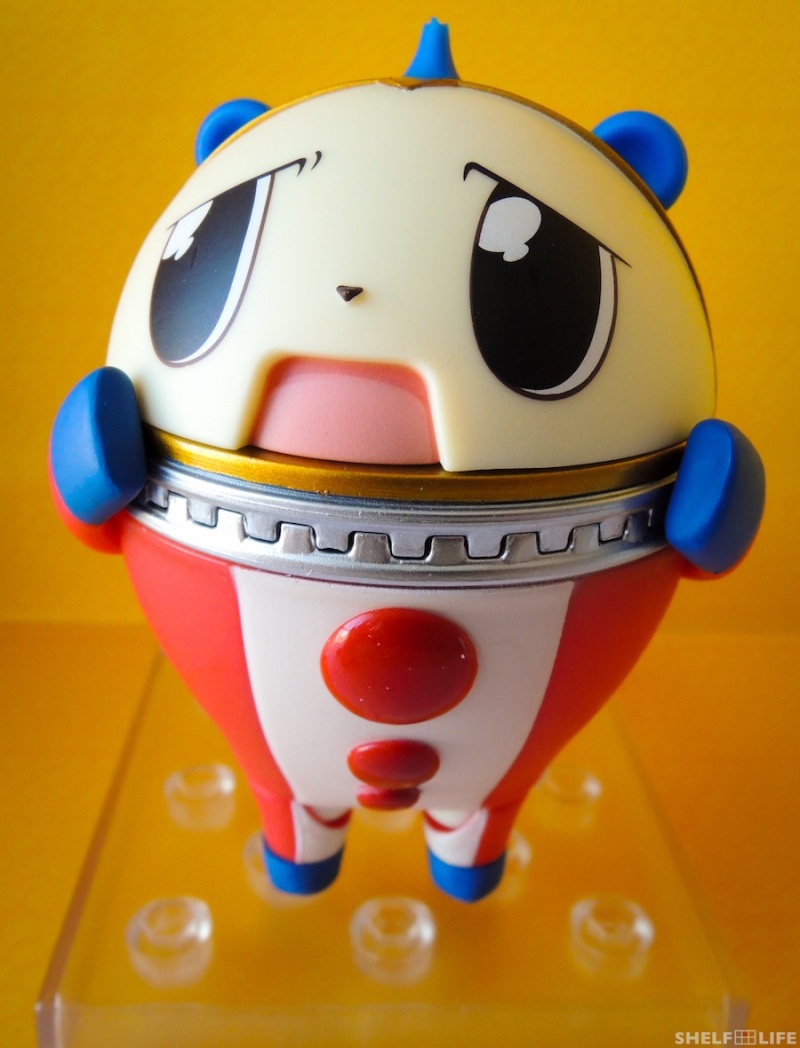 (; ´ Д `)
Here is Kuma’s upset/sad expression! Combined with the extra curved arms, you can make him look super worried~ This is my personal favourite pose. The hands on these arms are not removable. 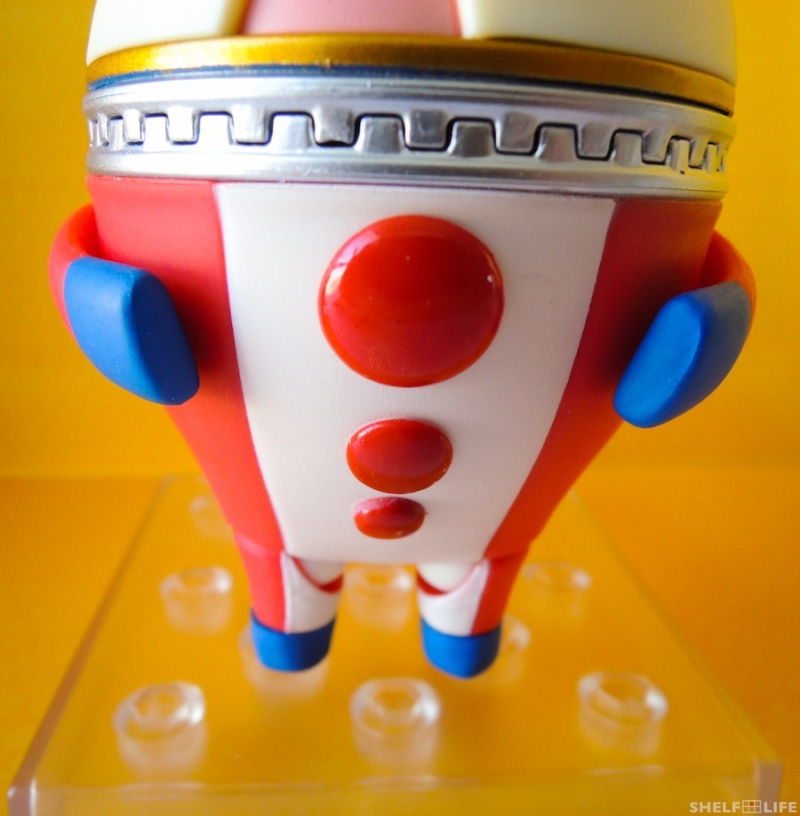 These curved arms can actually be used for a lot of poses. Let me show you what I mean – They can start as low as the second button on his suit to make him look like he’s holding his stomach… 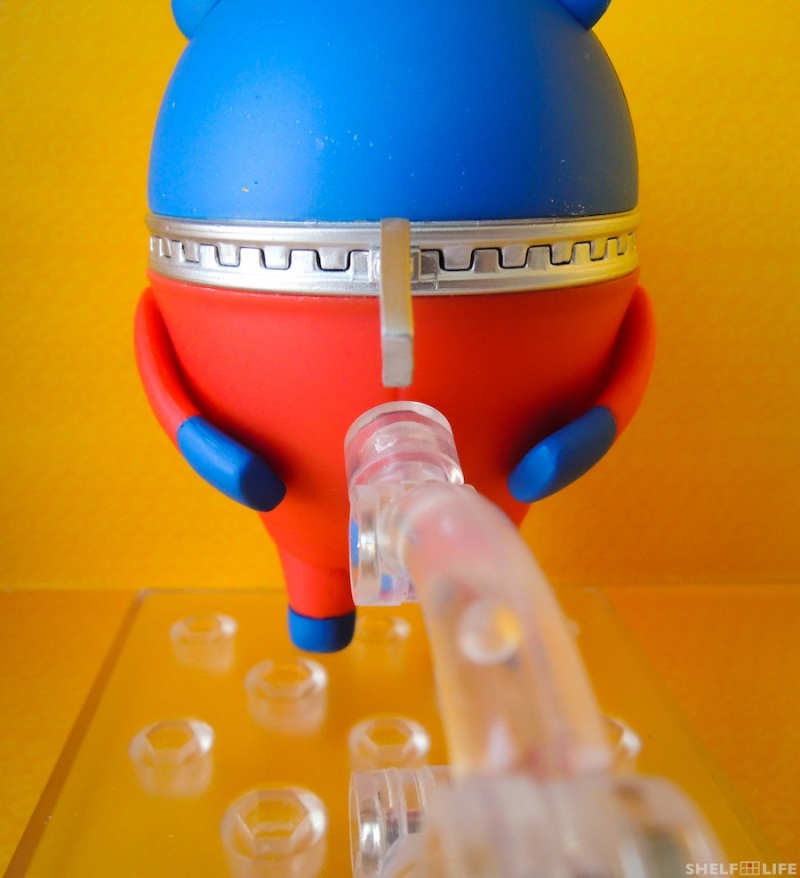 …all the way around his head to his lower back to look like an ojii-san.

Hehe, here is the Kuma we’re used to seeing in the game all the time.

(0A0)
Lastly, we have Kuma’s blank expression for when the bear-suit Kuma “dies”… 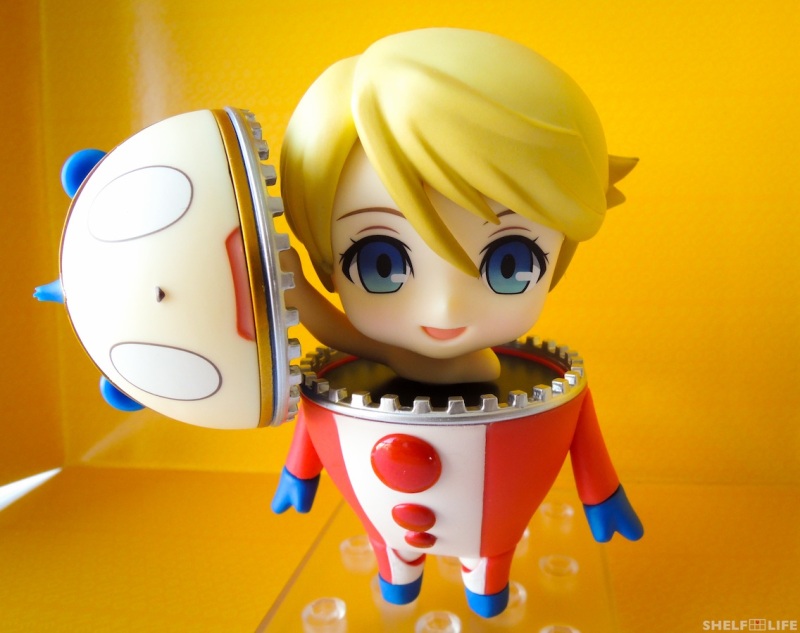 (((( ;°Д°)))) He’s no longer hollow!
… and Kumada is born! Here he is emerging from the bear-suit for the first time in human form and completely naked!

Okay, I lied. We don’t actually get a naked Nendoroid.. but instead, we have the shoulders and a right arm that can be attached to the bear-suit. Another peg attaches the head of the suit to the arm.

It’s Kumada~!（＾ω＾）
And here is the full-sized Nendoroid of Kuma’s human form, Kumada!

Kumada’s left side showing off his flowing blonde hair~ 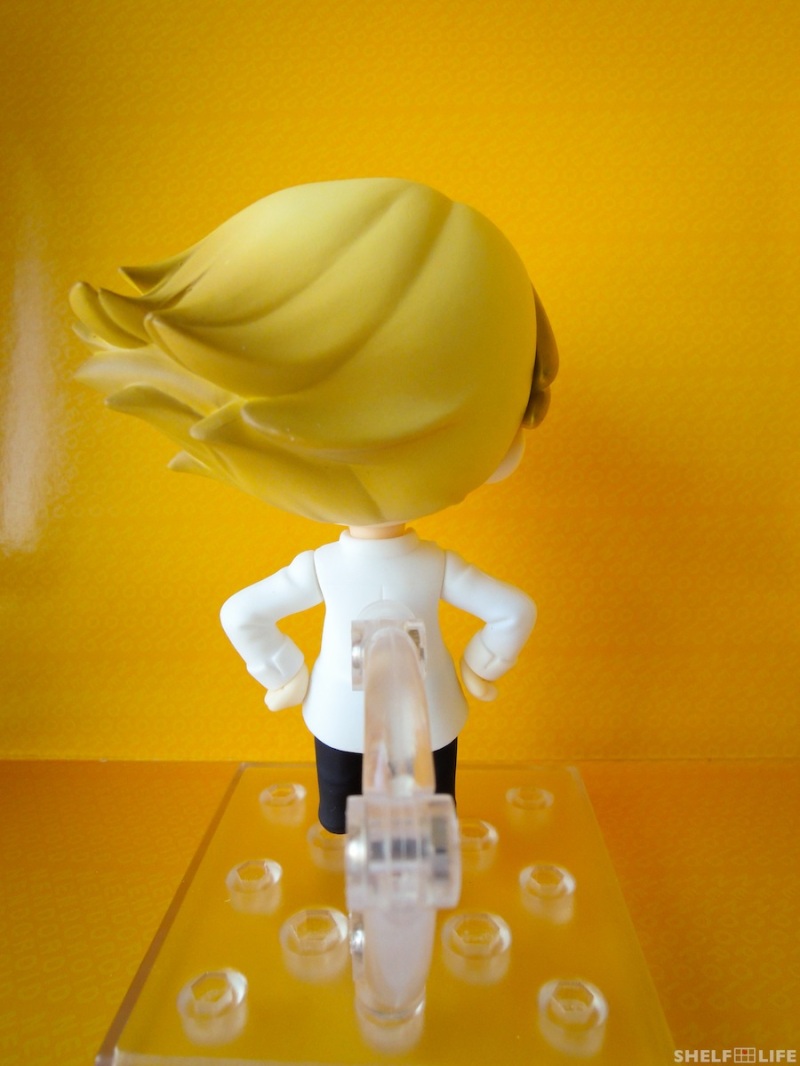 Here is his back side, again showing off his hair.

And his right side!~

More angles to show off how cute he is! 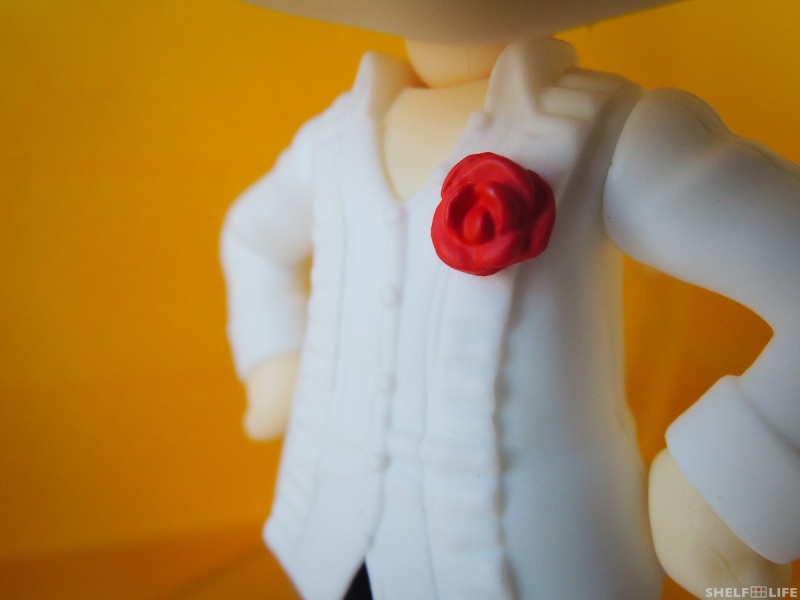 Kumada’s ruffled shirt~
Here is a close-up of his shirt. I just wanted to show you the detail that went into his rose and the ruffles~~

Kumada-nyan? (=^･ｪ･^=)
Unfortunately, Kumada doesn’t come with any extra parts. The poses you can do with his arms are also very limited… but I did manage to make him look like this~!! Too bad his hair didn’t allow me to put on Azusa’s nekomimi to complete the look… boo.

And of course with two stands, you can display both versions of Kuma at the same time! It’s like getting two Nendoroids in one!~

Well, that completes my review Kuma. He’s a cute little guy. I had lots of fun posing him, and I enjoyed all of his expressions. The fact that he came with his human counterpart was definitely a plus. I think it will also be fun to put other Nendoroids “inside” the bear-suit. Even though he’s not like a standard Nendoroid, he works and feels just like one, not to mention the quality is also great. There are little scruffs here and there, but nothing major!

I hope you’ve enjoyed reading my review! Please feel free to leave any comments or suggestions below~

Oh, and here’s a bonus picture of Kuma acting all superhero-y.