I have another review for you all today! It’s Matsumae Ohana, the main character from Hanasaku Iroha ~(^_^~) For those of you that haven’t watched the series, I would recommend checking it out! The animation is stunning, and the story is also pretty good.

And all her parts~
Here is Ohana’s blister. She comes with a broom, two trays, an extra body, a blue heron, a surprised face, a determined face, two arms to hold the trays with, and a cloth for her mouth. 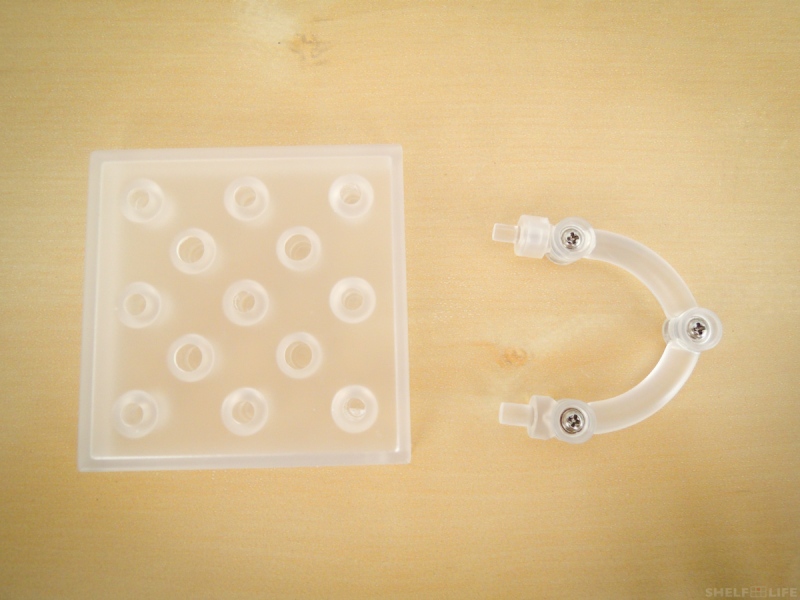 Ohana comes with the standard square base with the arm that plugs into her back.

Let’s get a closer look at her.
As usual, let’s take a look at the Nendoroid from all four sides right out of the box. This is the front, and I think they did a really nice job of recreating her uniform for Kissuiso, including the tiny pin on the front. Ohana’s default face is her smiling brightly, which reflects her optimistic personality perfectly. I also really like how they’ve sculpted her wavy hair. 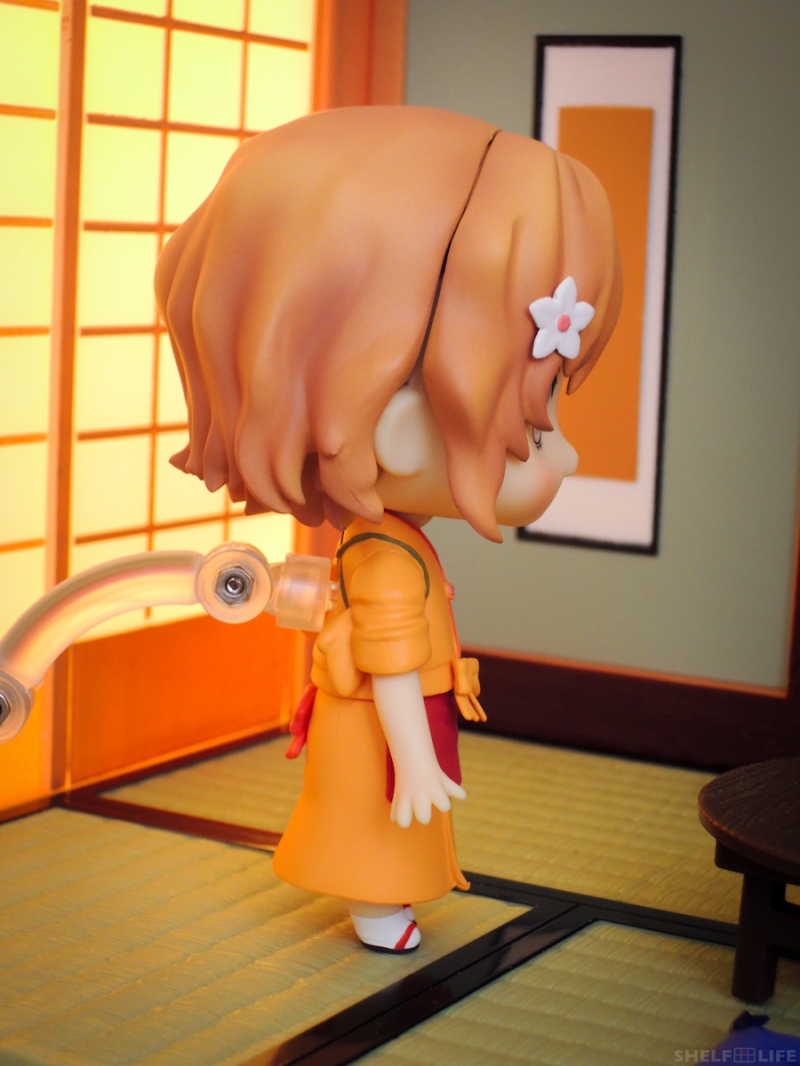 Here is her right side. The flower pins on her head are unfortunately not removable. 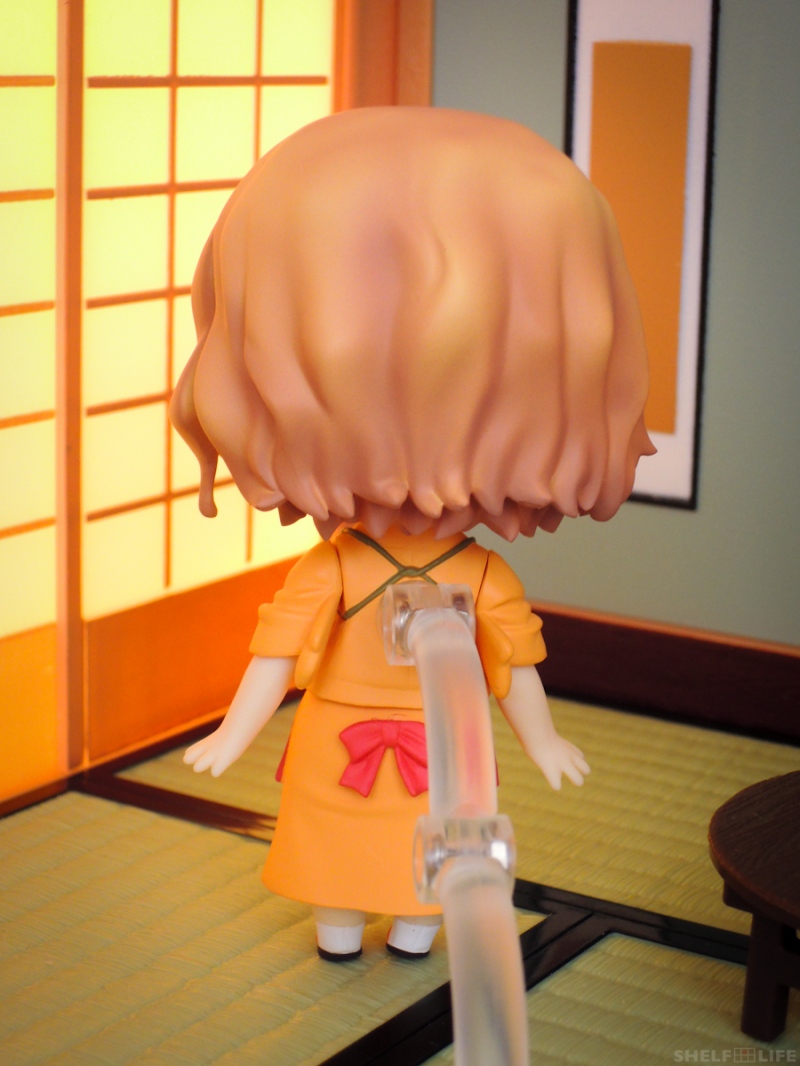 Here’s her back. I find it a little weird that the bow on the back doesn’t actually connect with her apron on the front…

And lastly, her left side, which looks identical to her right.

Welcome to Kissuiso ( ° ▽ ° )ﾉ
Ohana has joints in her neck, shoulders, arms, waist, and legs. Very standard for a Nendoroid. 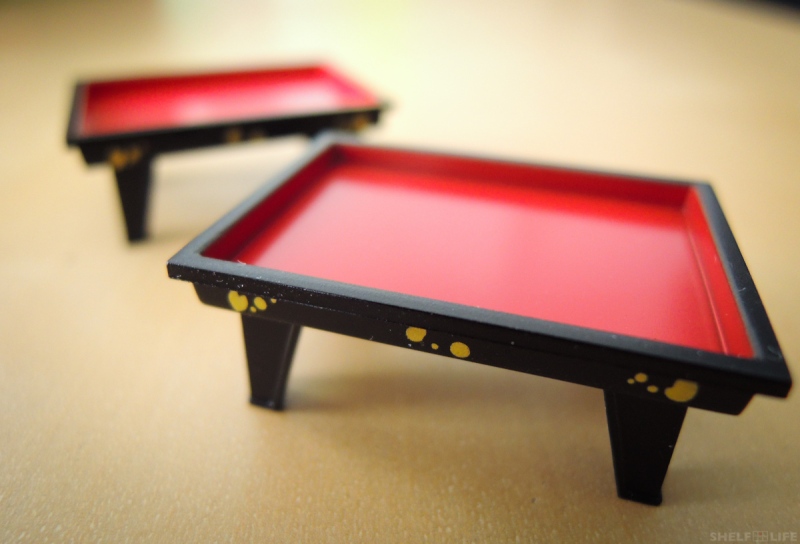 Food trays!
Ohana works as a maid/waitress at Kissuiso, and one of her jobs is to serve food to the customers. The Nendoroid comes with two of these food trays, which are actually pretty detailed for their size. 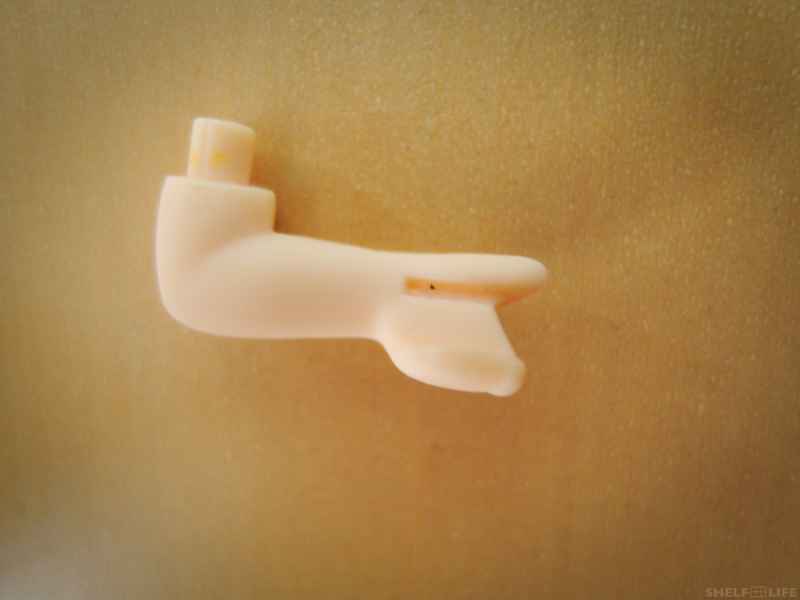 If you have Nendoroid-sized accessories, you can make her carry food! 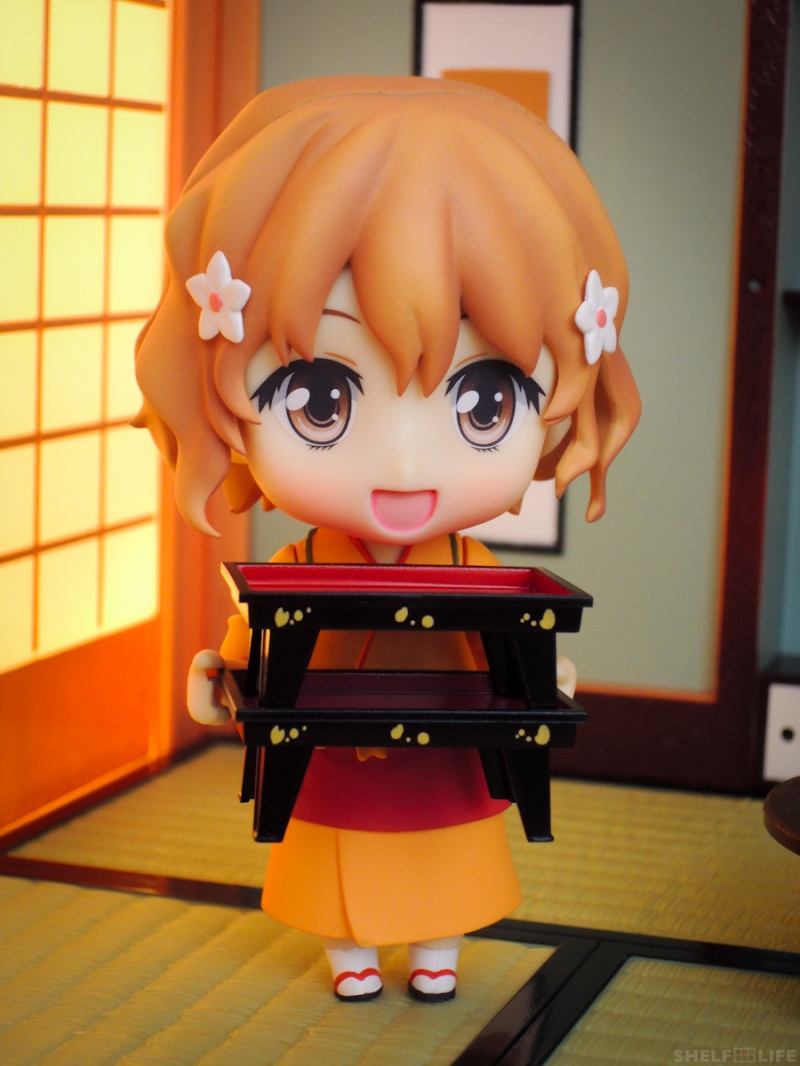 Or you can stack them and make Ohana look like she’s cleaning up. 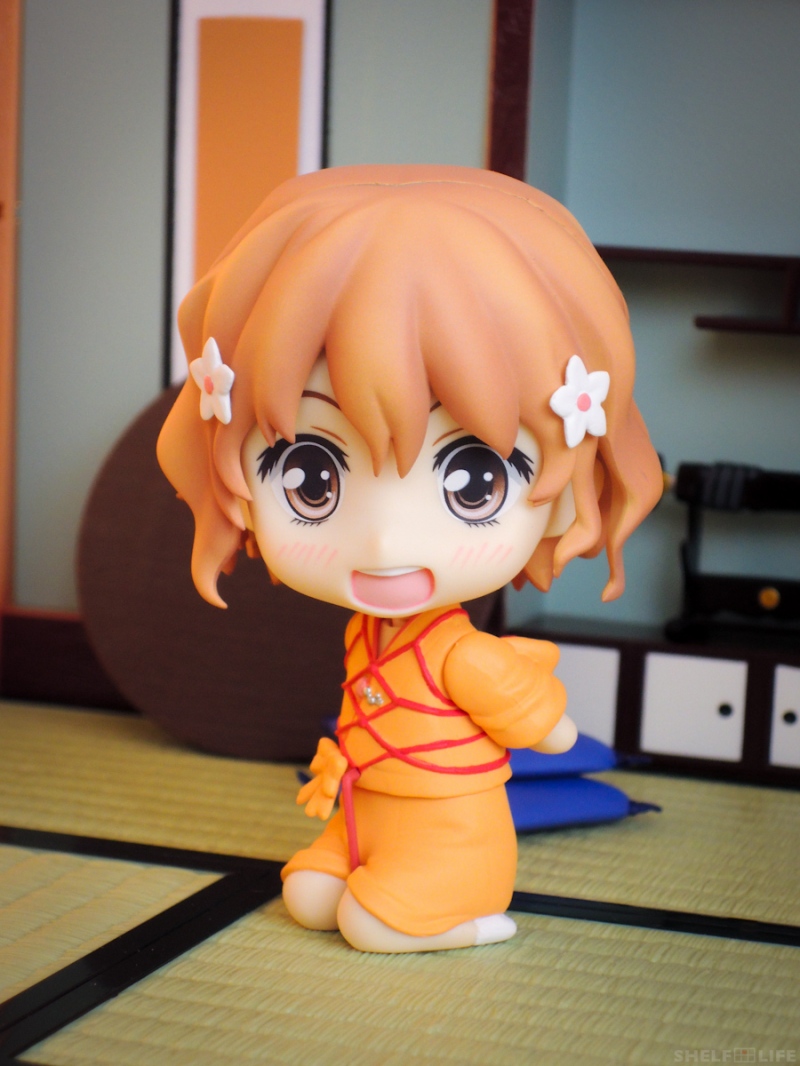 (((( ;꒪Д꒪)))) Bondage!?
Here’s Ohana’s surprised face! Yes, Ohana’s extra parts does include this bondage piece, to recreate a scene from the series, but it’s not what it looks like at all! It’s a rather silly scene, actually. 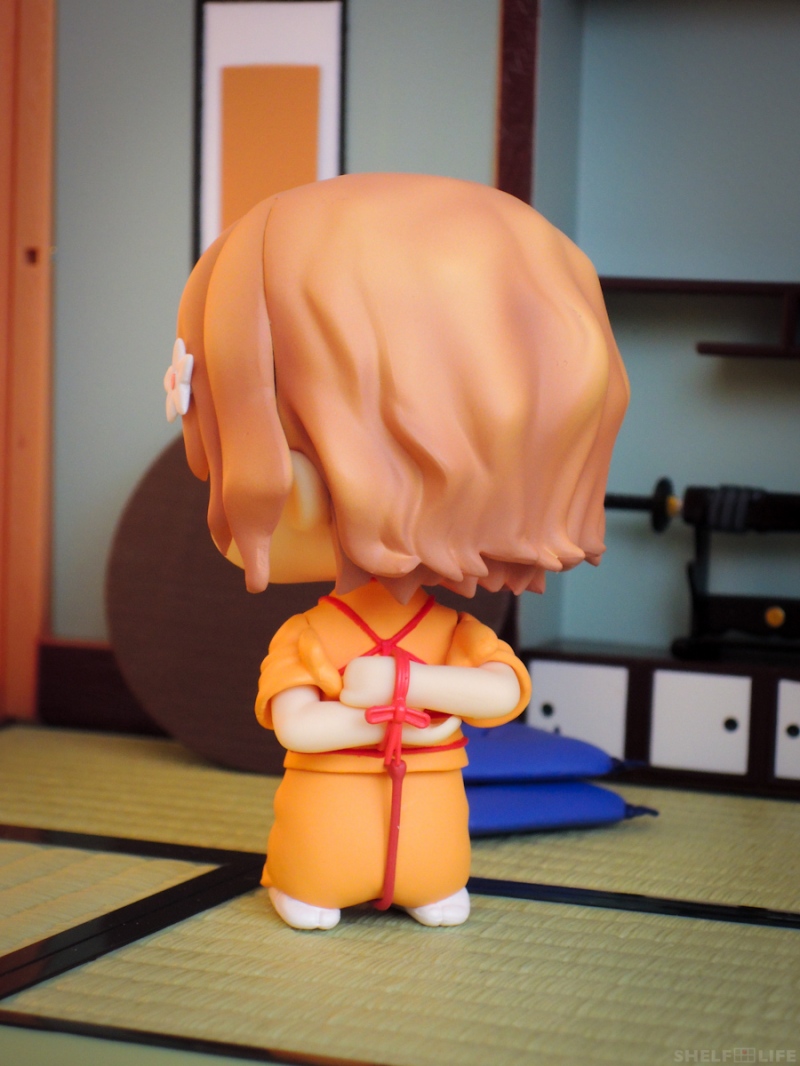 The rope that goes around her pelvis and the rope around her wrists look like this! The part for the wrists came separately in the blister, while the other part is just removable from her body (luckily!).

Ohana’s getting angry… (>_<)
In addition to a surprised face, Ohana comes with a stern/angry/determined face. 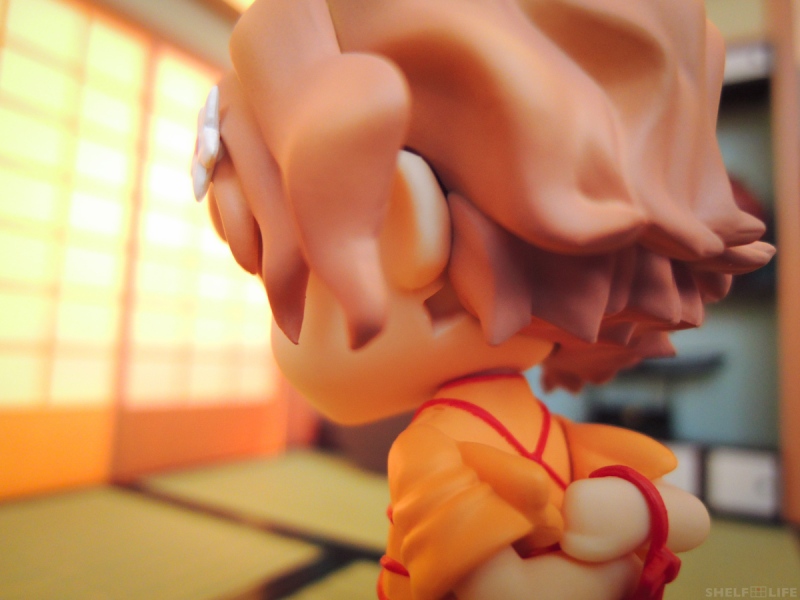 This is a special faceplate, because it comes with indents on the back of her face… 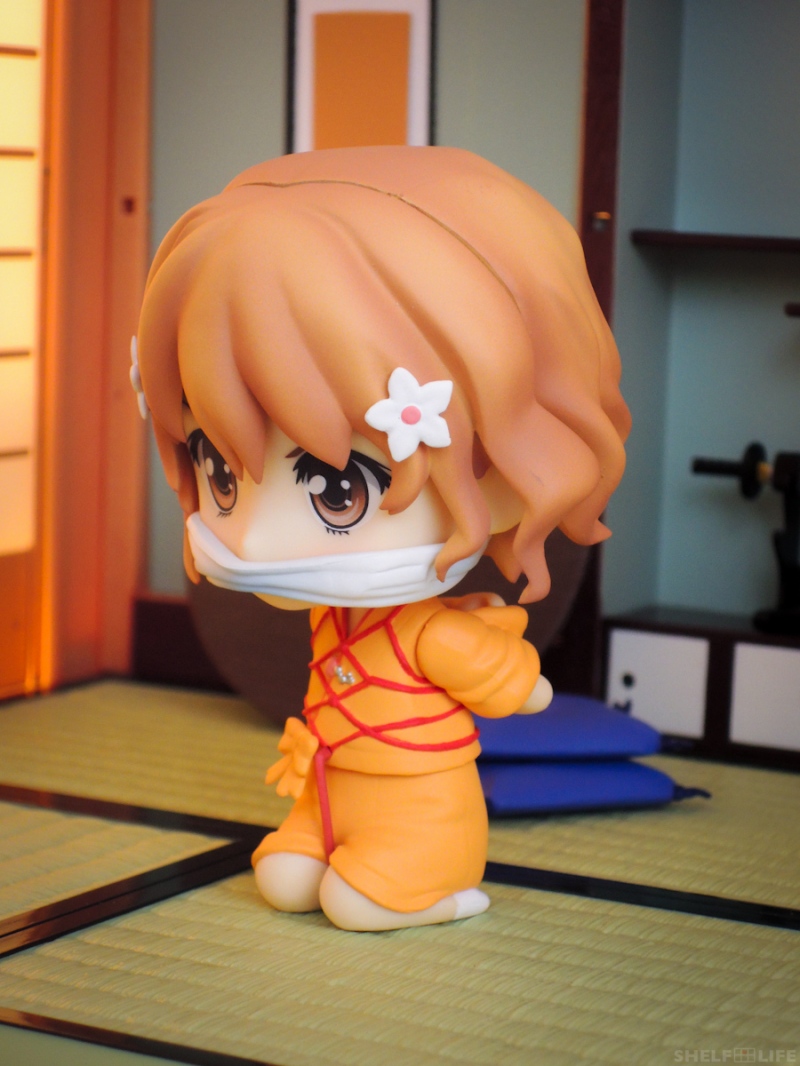 …for none other than the cloth to cover her mouth with…! Now that completes the kidnapped look. I don’t have it pictured here, but of course, you can also use this face to make it look like Ohana is determined and hard at work.

Ohana serving food!!
Since the rope is removable, we can use the sitting part normally! Here she is kneeling to serve food for her customers.

And the arms are also removable from the bondage body! In fact, these are the arms you need for her to hold her broom properly. I’m sure there are lots of other poses you could make with these bent arms.

Kyaaa~~! Σ(ﾟﾛﾟ｣)｣
Like this one, combined with her surprised face! How did the heron get in here?! 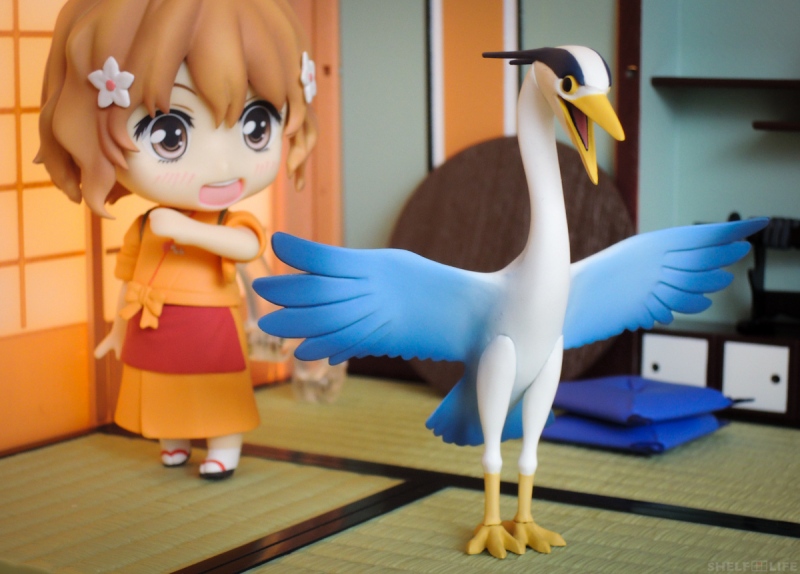 Finally, the last accessory that comes with Ohana is a figure of the blue heron that repeatedly shows up throughout the series and scares Ohana. This is what it looks like from the front. It’s actually quite detailed and looks pretty nice. 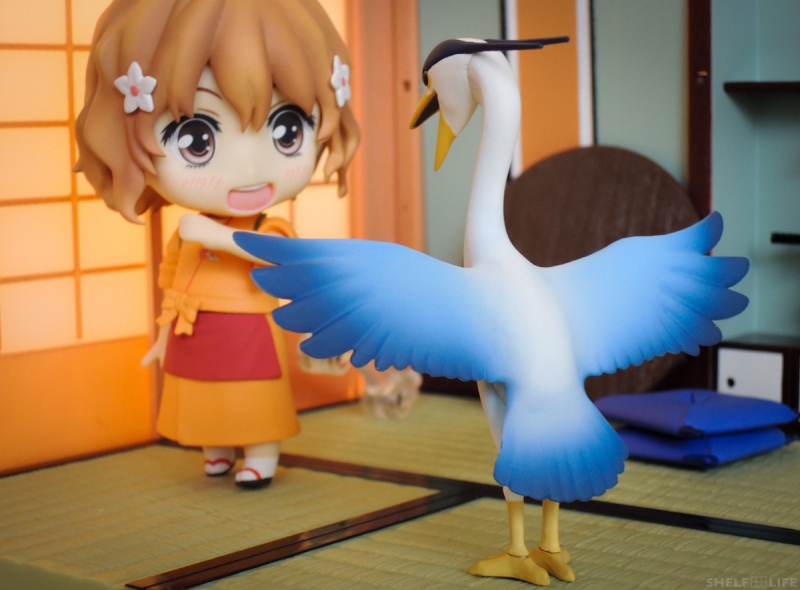 And this is the back! I love the blue~ In my opinion, the heron is a nice and unique addition to Ohana.

Anyway, that’s my overview of the figure! I didn’t really find any flaws with my particular figure. Her parts fit together nicely for the most part, and the paintwork was surprisingly well done. I expected there to be blunders on the smaller parts, but I didn’t notice any. My only concern is the arms used with her trays. First, the indent was a little too small for the tray to fit easily into the hand, and second, the paint on the tray rubs off of the hands. She comes with a decent amount of extras. I’m not a big fan of the bondage parts, but it is a funny piece if you know the context. I just wouldve preferred something else if I had the choice.

All in all though, I think Ohana is still really cute, and her genki optimistic personality still shows through in her Nendoroid form. 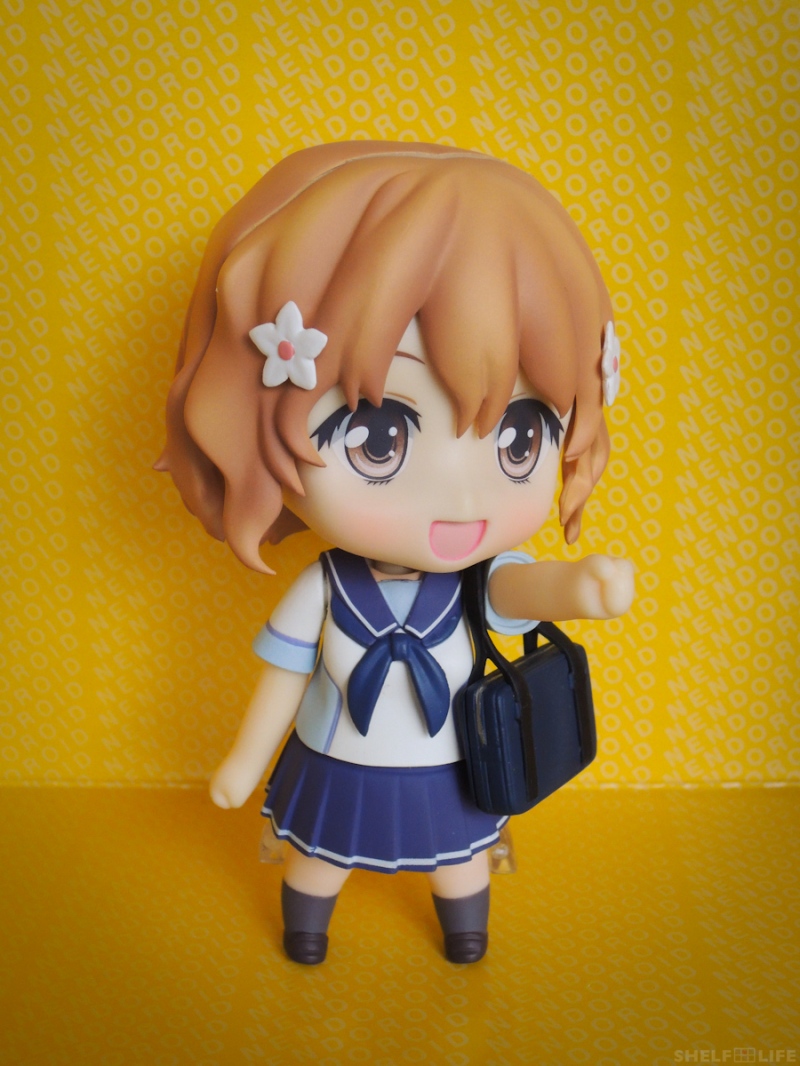 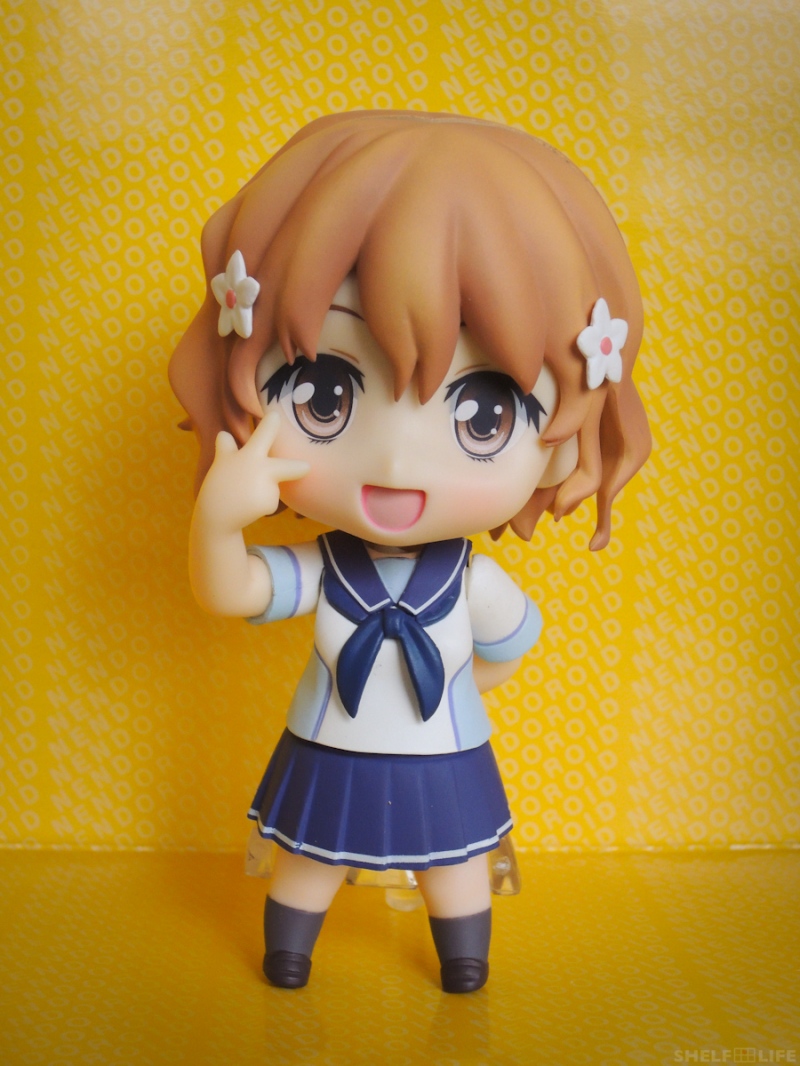