I hope everyone had a wonderful holiday season~ Lots of things have happened this past year, leading to a bit of neglect for my blog during the second half of 2013.. but it is now 2014, and to jump-start my blog for the new year, I have acquired a new toy: a camera! It’s not a super fancy camera or anything, but it is definitely an upgrade from my old point-and-shoot. Please bear with me as I learn to use my new camera to bring out the best in my toys.

Anyway, the first Nendoroids to get reviewed for the new year are Rin and wooser from wooser’s hand-to-mouth life! Does wooser count as a Nendoroid?

Here’s what the box looks like.
It has the post-300 box design, and since it comes with a mechawooser, the box is much larger than your average Nendoroid’s. 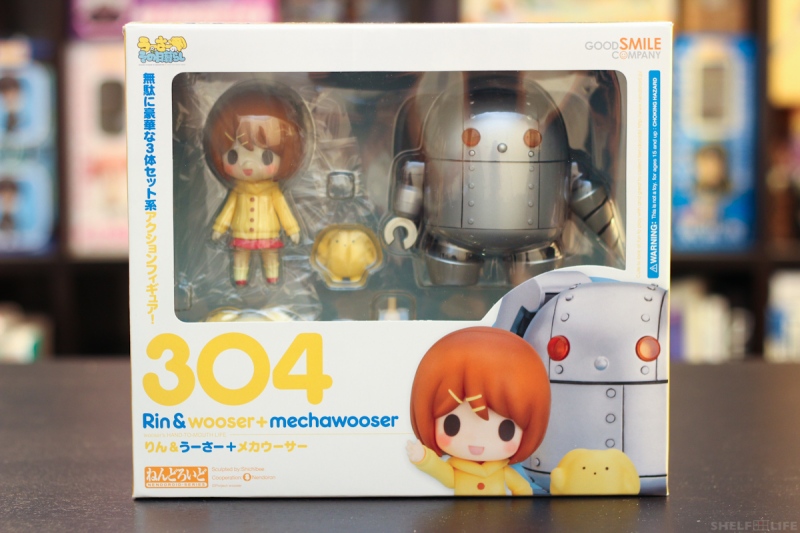 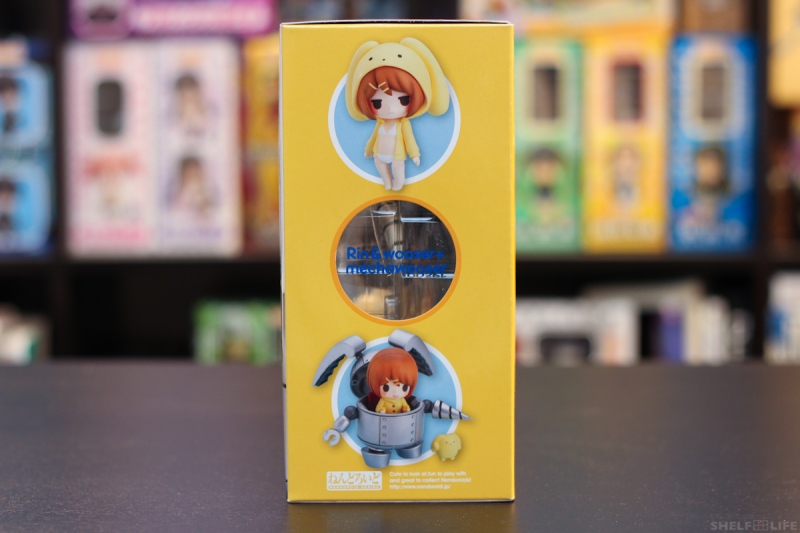 A bonus insert!（°o°；）
Instead of the regular coloured “NENDOROID” print insert, Rin and wooser come with a special insert that looks like this~ 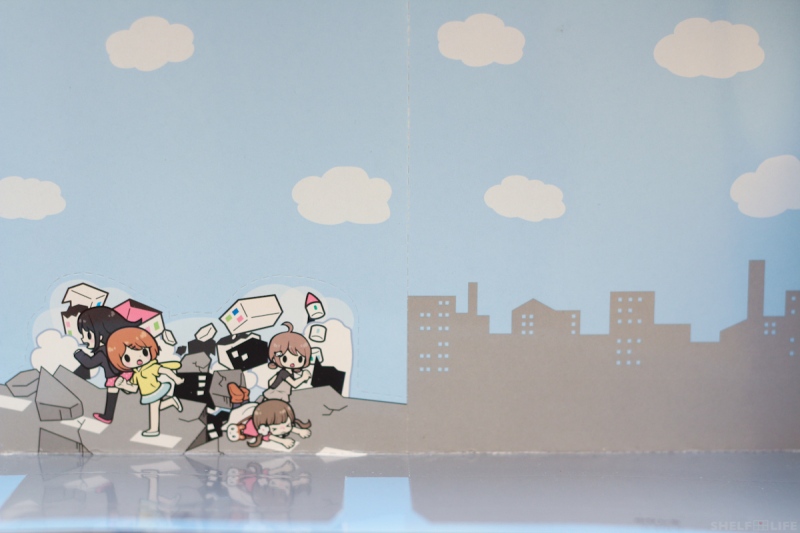 You can cut them out and use them as standees for Mechawooser to recreate the scene where he destroys a city looking for school girl uniforms. 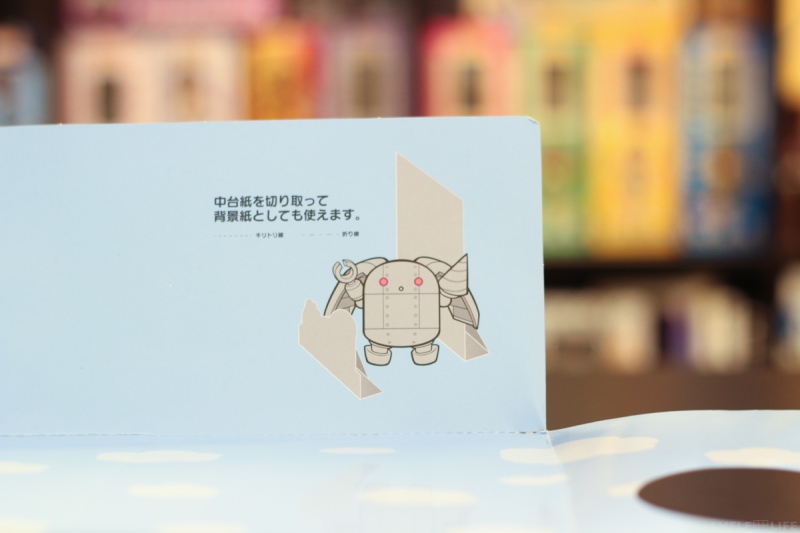 So many parts!~
Here are the front and back views of everything this set includes: Rin, wooser, mechawooser, an extra head, expression, body, and arms for Rin.

This set comes with two bases, one arm stand with two peg-type connections of different lengths, one small hinged arm stand, and a circular base for wooser. The longer peg for the arm stand is used for when Rin’s hood is behind her back, and the small hinged arm is for mechawooser. Good Smile also included an extra Nendoroid neck joint.

Introducing Rin and wooser!! ⊂(・.・⊂)\
Here they are right out of the box. Wooser is so tiny~ He doesn’t stand up on his own, unfortunately. 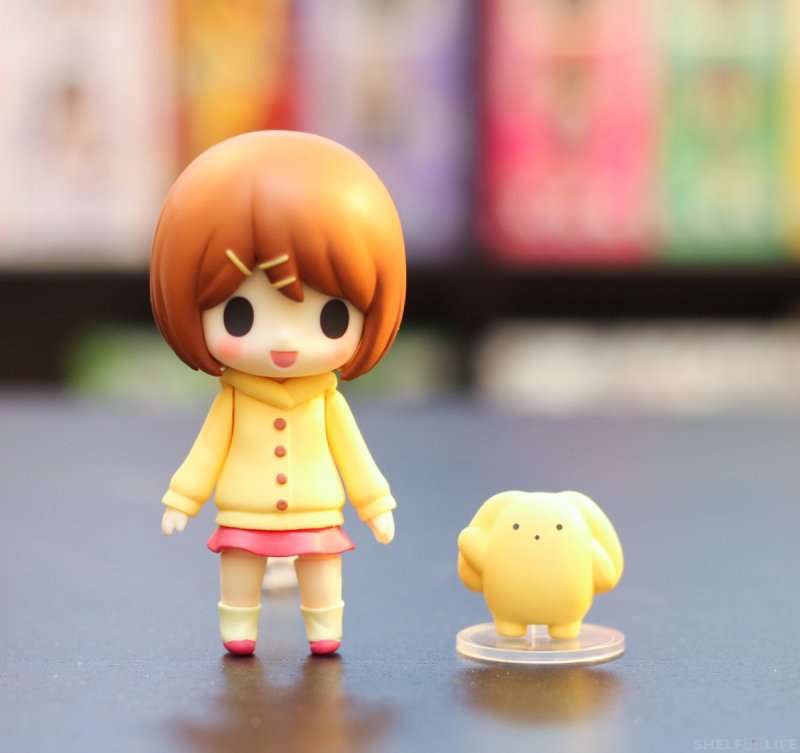 Let’s take a closer look at the two of them.

This is the adorable Rin~
She is really simple but still done very carefully. I love her wooser hoodie! She has all the standard Nendoroid joints: a joint at her neck, connections at the shoulder, wrists, and waist, and joints at her legs. 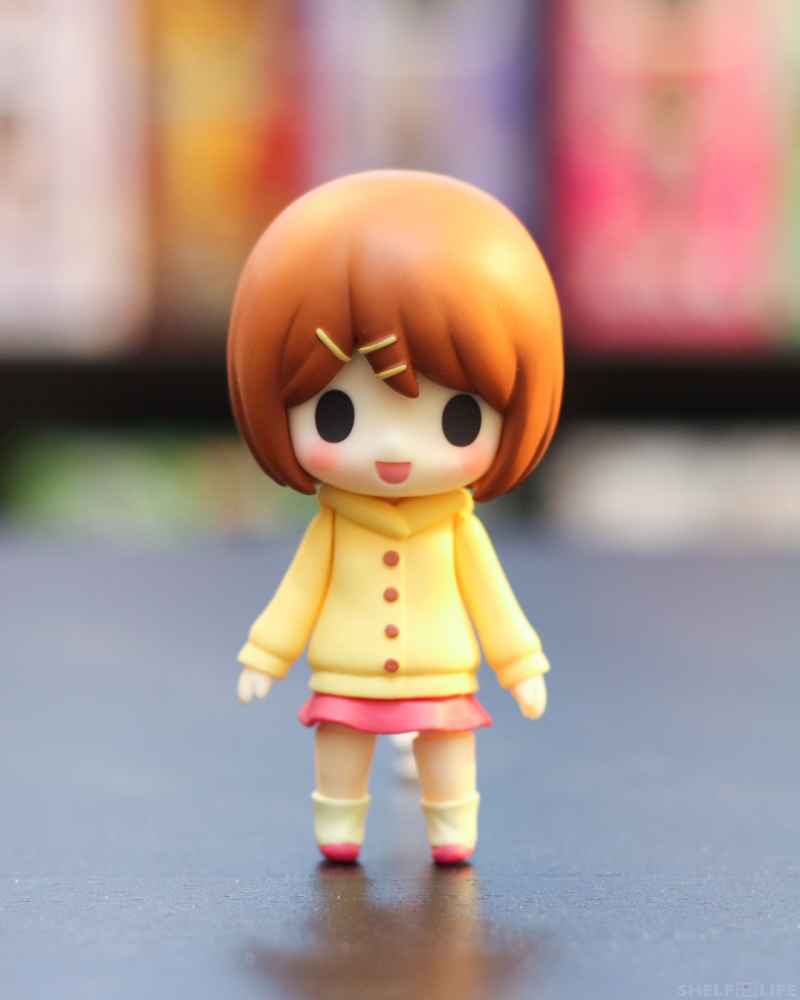 And this is the cute yellow “animal” with a terrible personality, wooser.
It’s unfortunate that we can’t pose him, so he’s stuck in this position with one arm up. Oh by the way, for those that aren’t familiar with the series, the middle dot is his nose, not mouth. He likes to make that distinction. 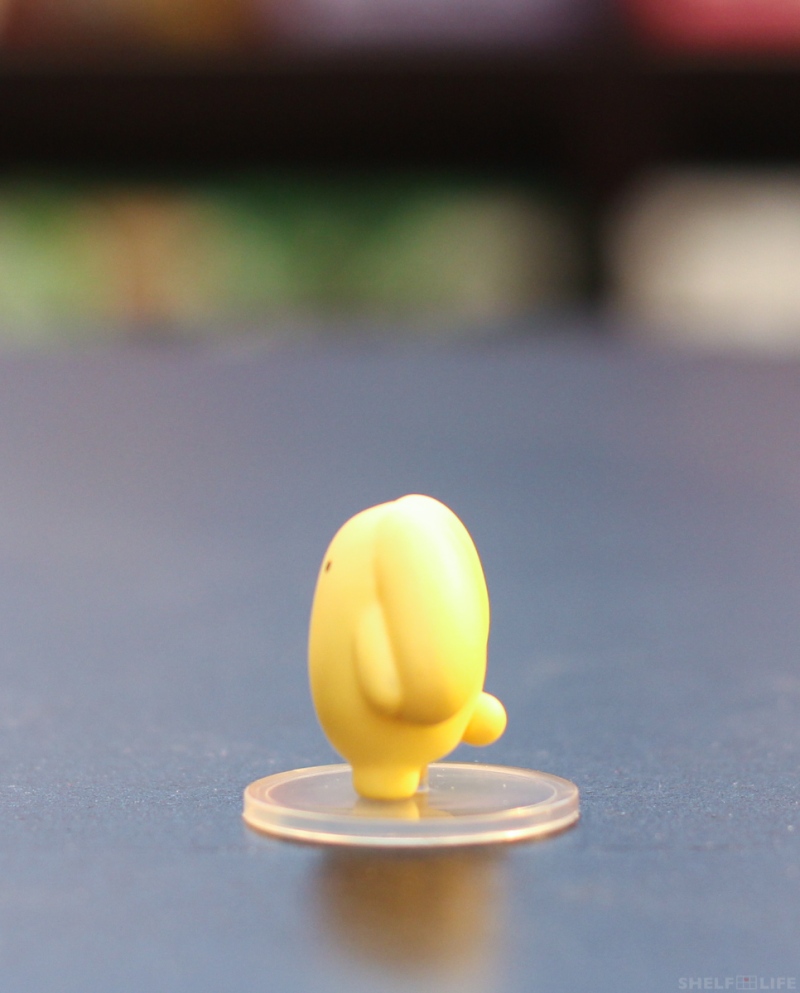 Rin’s hood is, of course, removable. Here’s what it looks like.

You can even put the hood on her head!
You can replace the hair parts with the extra hoodie parts to display Rin with her hood up. There’s extra space at the base of the hood so you can rotate her head. 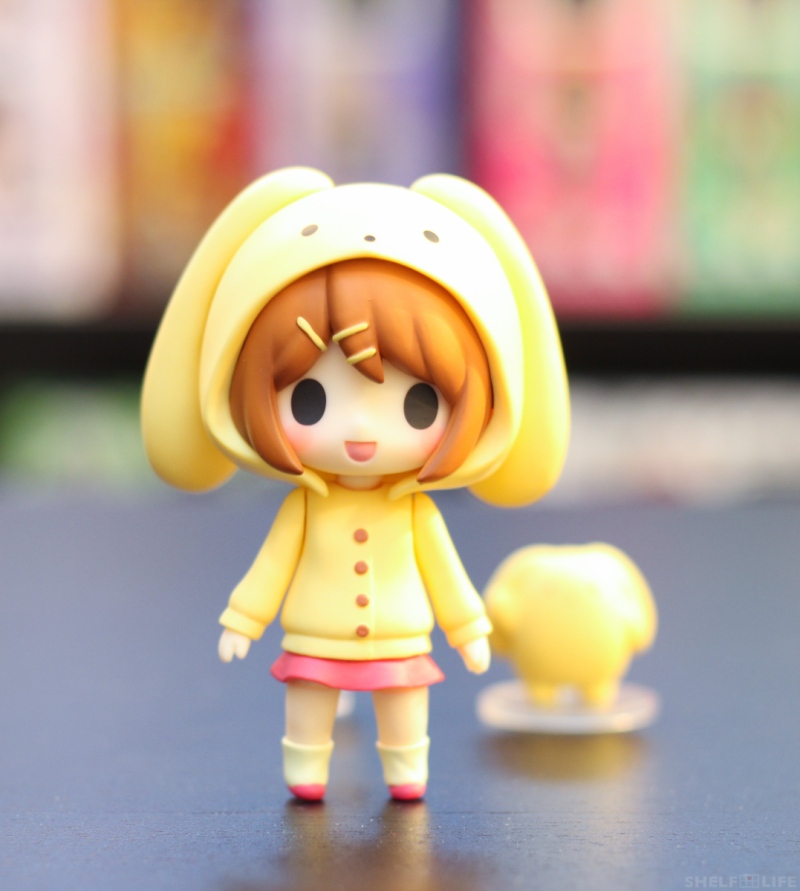 The ears on the hoodie are joined by a ball joint, so they can rotate all around the hood.

The second one is a right arm reaching out to the side with a hand that looks like it’s holding something.. but it’s actually for forming half a heart when combined with Nendoroid Ren. I’ll show you later when I get the chance to review Ren.

The last two arms are these bent ones facing forward with hands that are curled, meant for holding the joysticks on mechawooser. Also, all of Rin’s hands are removable from the arm, so you can mix and match them to form all sorts of poses and expressions. 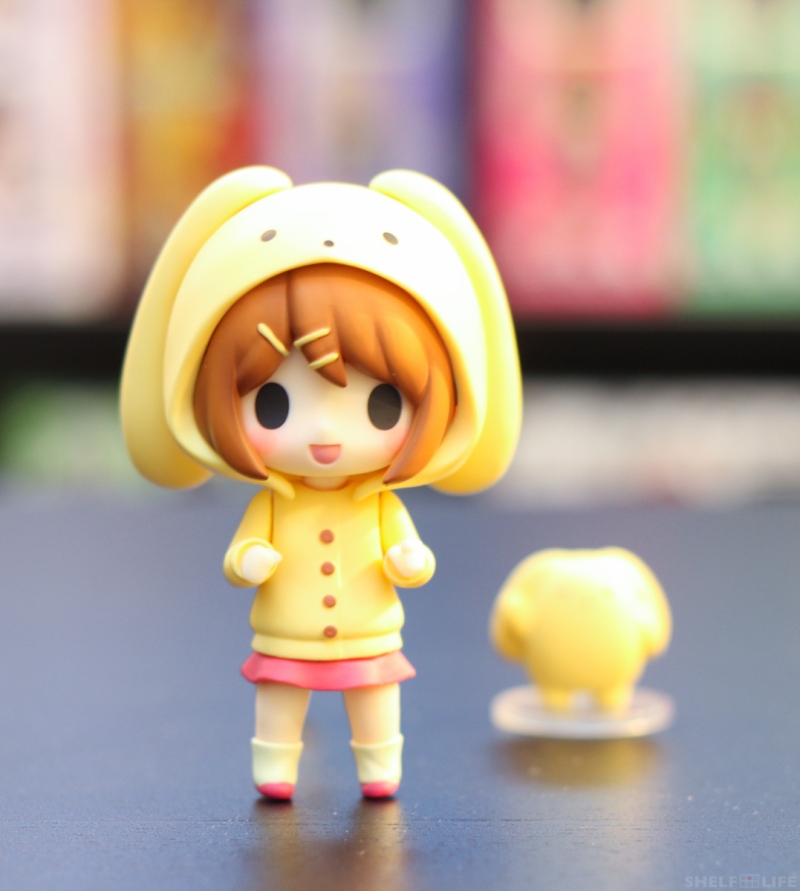 The next extra part for Rin.. an alternate swimsuit body! Rin is still wearing her hoodie, so you can attach any of her arms onto this body. There’s no connection at her waist, but her legs do have joints. I have her with the hood up, as this body is meant to be displayed that way. 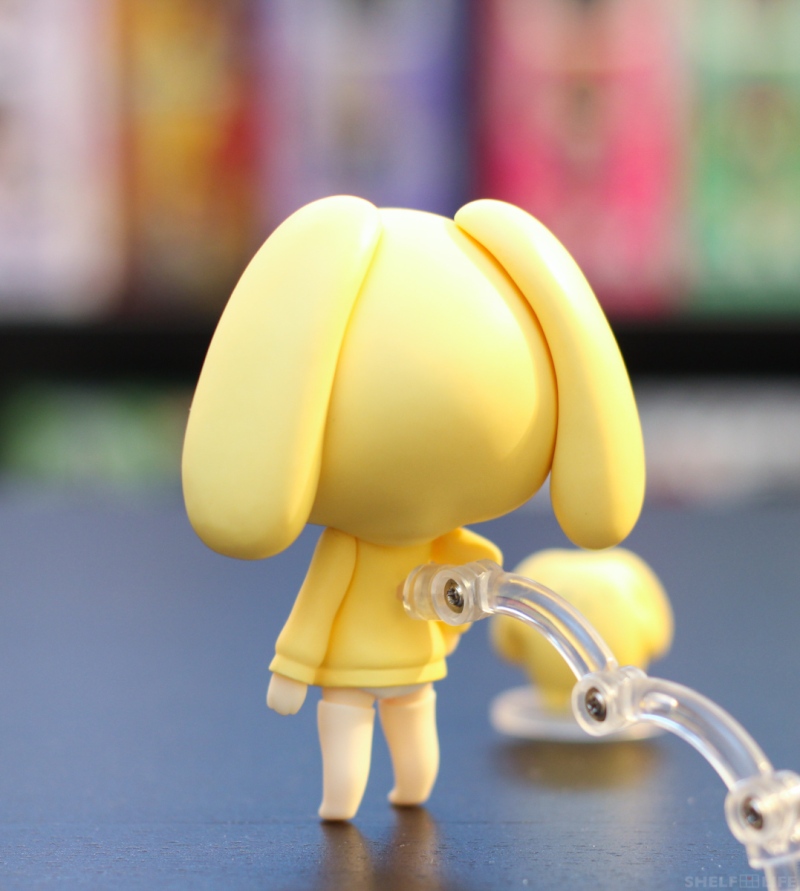 But you can also attach the hood part onto the body~ Just a word of caution: the hole in her back doesn’t line up very well with the hood on her back. It’s actually too high and the hood covers it, so if you want the hood down with the swimsuit, you need to leave more space between the head and the body.

(￢_￢)
Lastly, Rin comes with an extra glaring expression. I don’t like this expression as much, so I’ve been showing Rin off with her happy beady eyes, but I do still find this expression adorable! No matter how angry Rin will get glaring at me with that face, she’ll still always be cute. 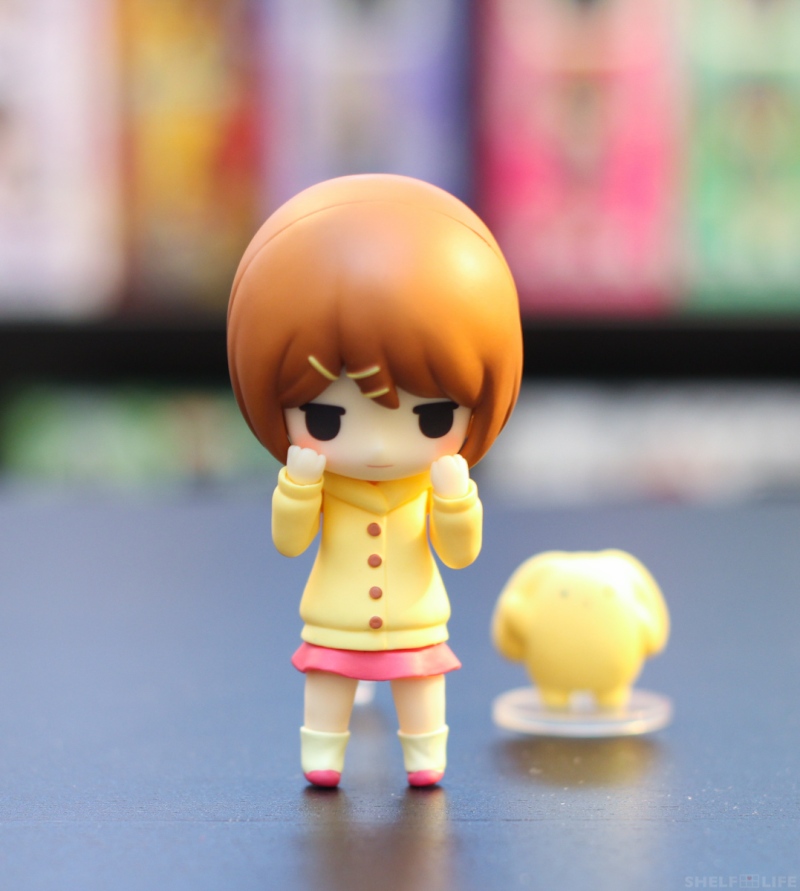 There are two Rins! (・o・)
If you’ve been keeping track, this set actually contains enough parts to put together two full-sized Nendoroids. There’s only one arm stand though, so if you want to display them both at the same time, you’ll need to borrow a stand from another Nendoroid.

and that piece is mechawooser!!
Mechawooser is massive! His body resembles metal with bolts down his front and back. He has a drill for his left hand and a claw for his right hand.  He has a little funnel tail, and red eyes made with translucent plastic that I wish could light up (I’m sure an experienced modder can make that happen). The hole in his back won’t fit an arm stand, so I think it’s purely aesthetic. The actual hole for the stand is at the bottom under his tail. 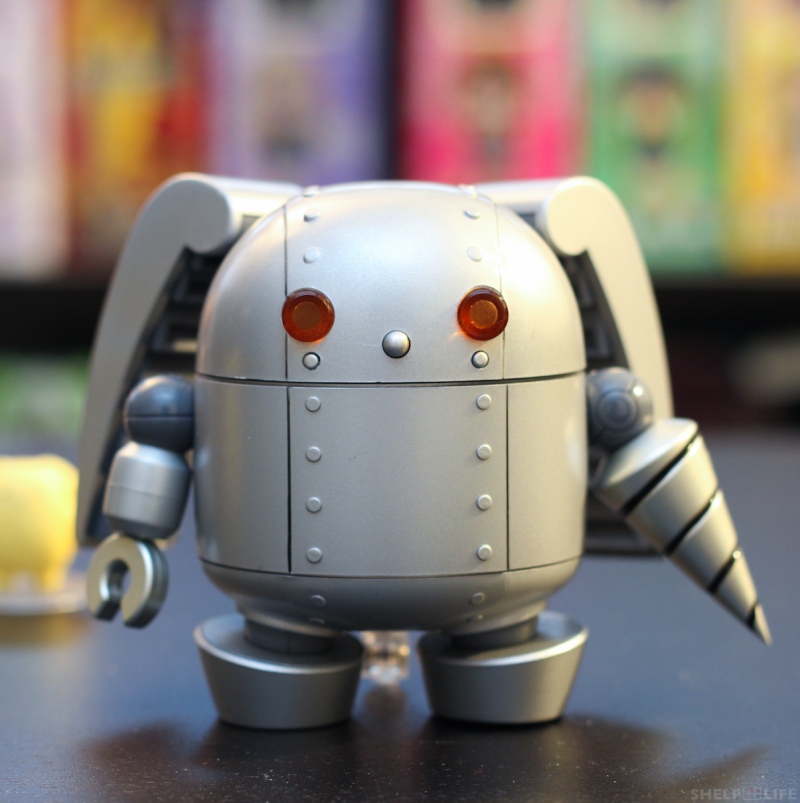 He’s way more poseable than I had thought. His ears are attached via regular Nendoroid joints. His arms and legs use a larger version of the standard Nendoroid joint, so they can also rotate and bend in two directions. The claw rotates around the wrist, and his head, body, and bottom are all detachable from each other, making it possible to turn any one of those parts as I’ve done above (notice how the bolts don’t line up). 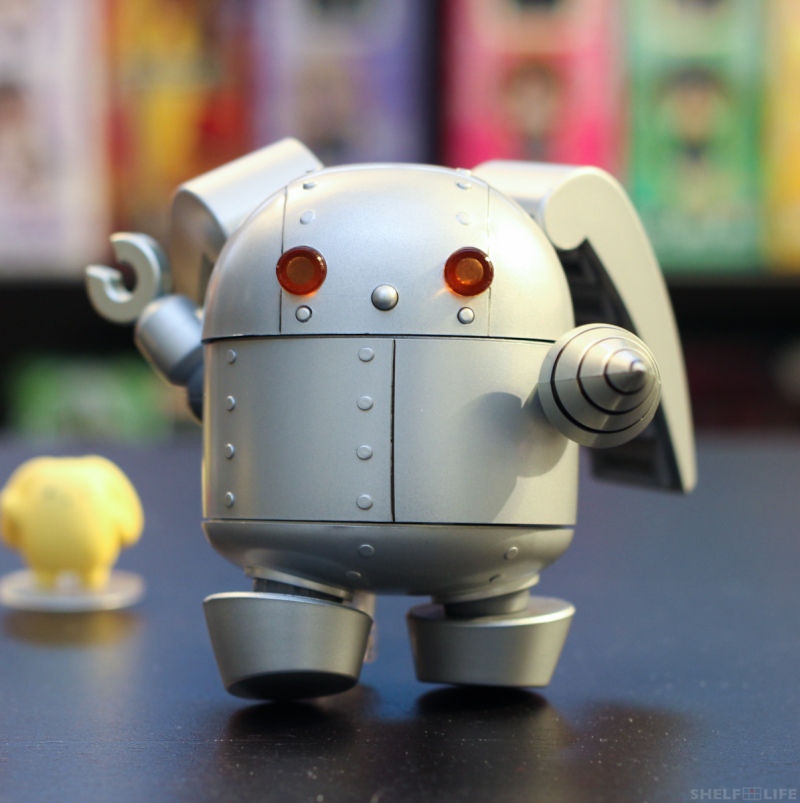 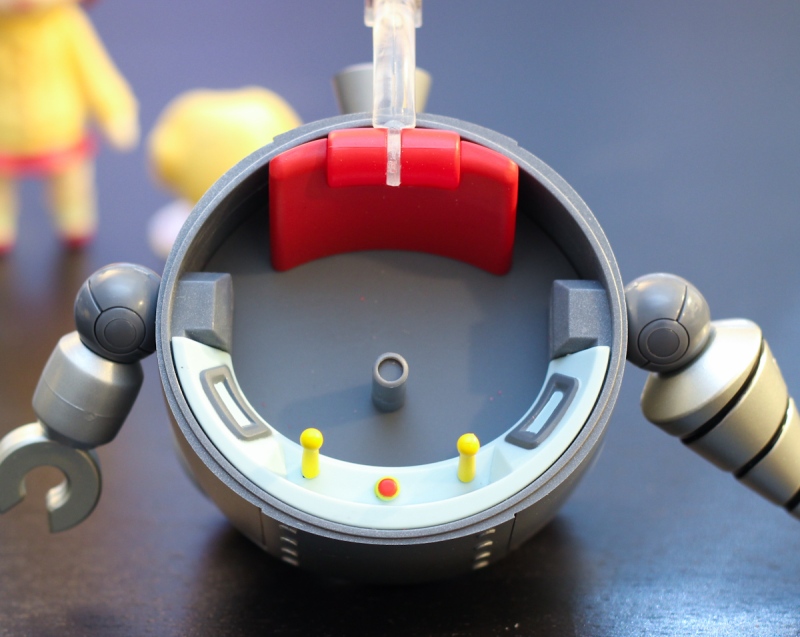 You can also have Rin wear her hood up while sitting inside mechawooser. There’s enough space for that.

Hehe, Rin is not amused by wooser… 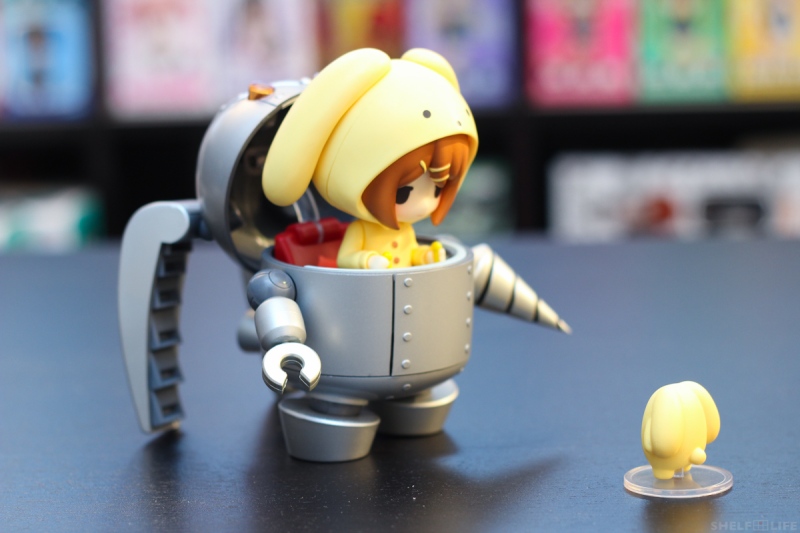 Anyway, I think they replicated Rin and wooser in Nendoroid form very nicely. The original character designs lent themselves really well for the transformation. I had a ton of fun playing and posing with Rin and the mechawooser. Wooser was less fun since he was permanently waving at me, but I’m definitely glad he was included anyway. The paint job was actually done really well, and I didn’t have any serious problems with the extra parts, although I am a little concerned with the wooser hood not lining up with the swimsuit body. I’m not sure if it was a design choice or just an isolated problem with mine.. The set is pricier than your average Nendoroid, but you do get two full-sized Nendoroids, a wooser, and an awesome mechawooser. My overall thoughts… Rin is just too cute (>⌓<) She is super adorable. Her beady black eyes are a nice change to the regular anime-styled eyes of other Nendoroids. Unless you hate cute girls, wooser, and/or mechas, you probably won’t be disappointed by this set.