How’s everyone doing? Today, I’m going to be taking a look at Mikasa Ackerman from the popular series, Shingeki no Kyojin! She was actually just released last month, so you may still be able to find her if you are interested in picking her up. I’m not a huge SnK fan, but I did enjoy the anime. Here’s what I thought about her Nendoroid~

The box looks like this!
Here are the four sides of Mikasa’s box, showing off some of the poses that you can put her in. It looks just like any other Nendoroid box post-300 to be honest. 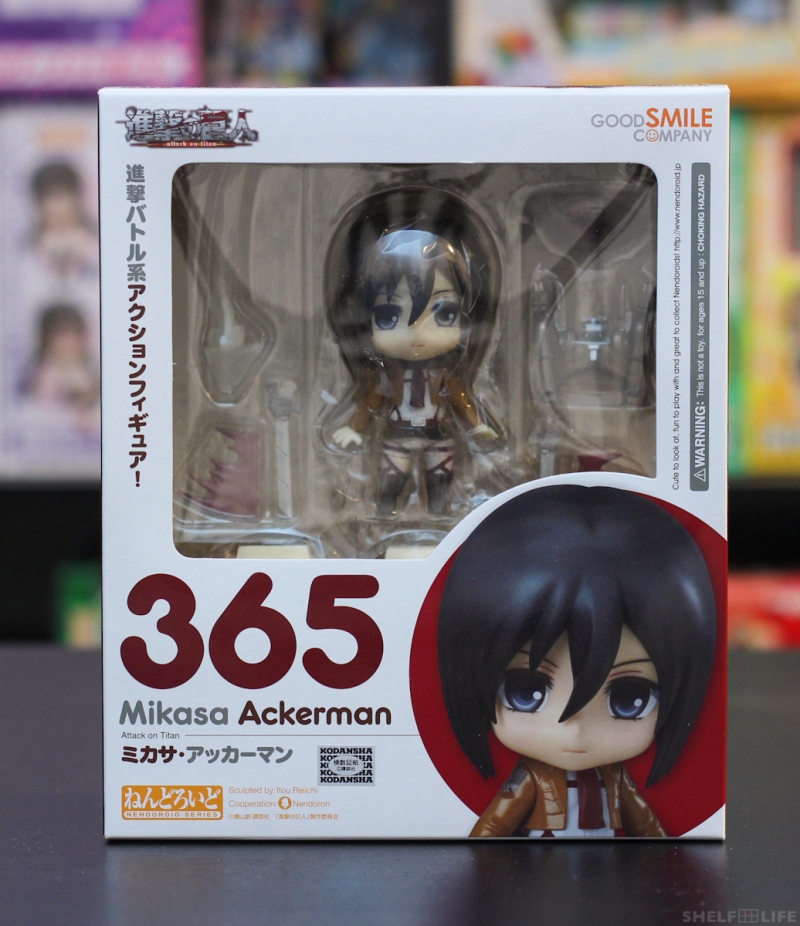 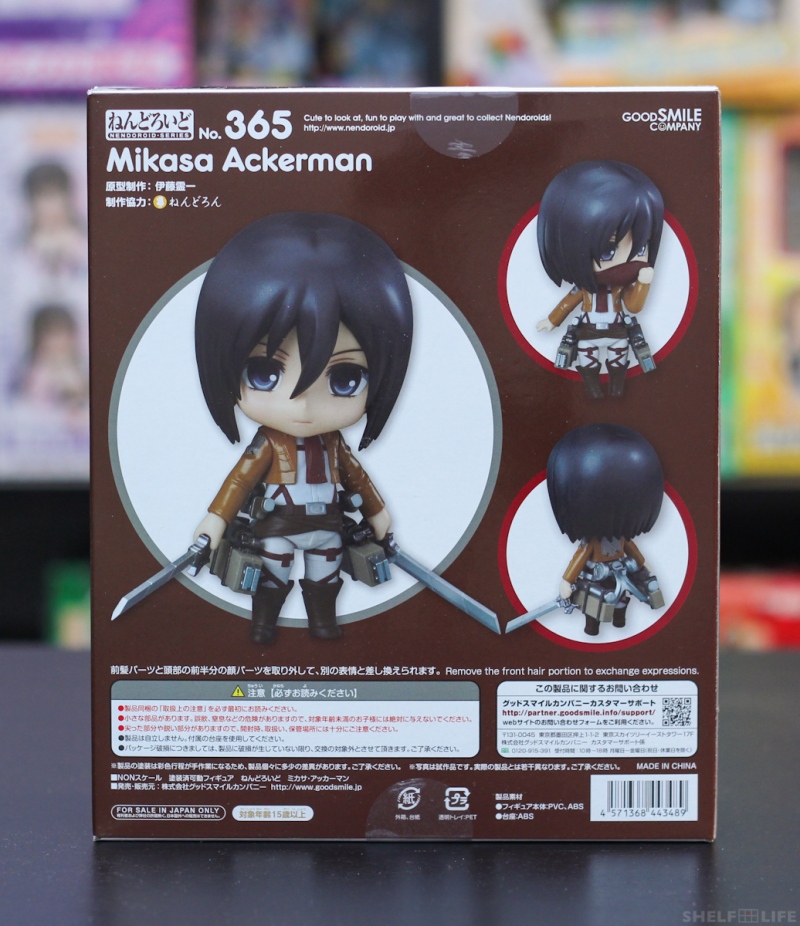 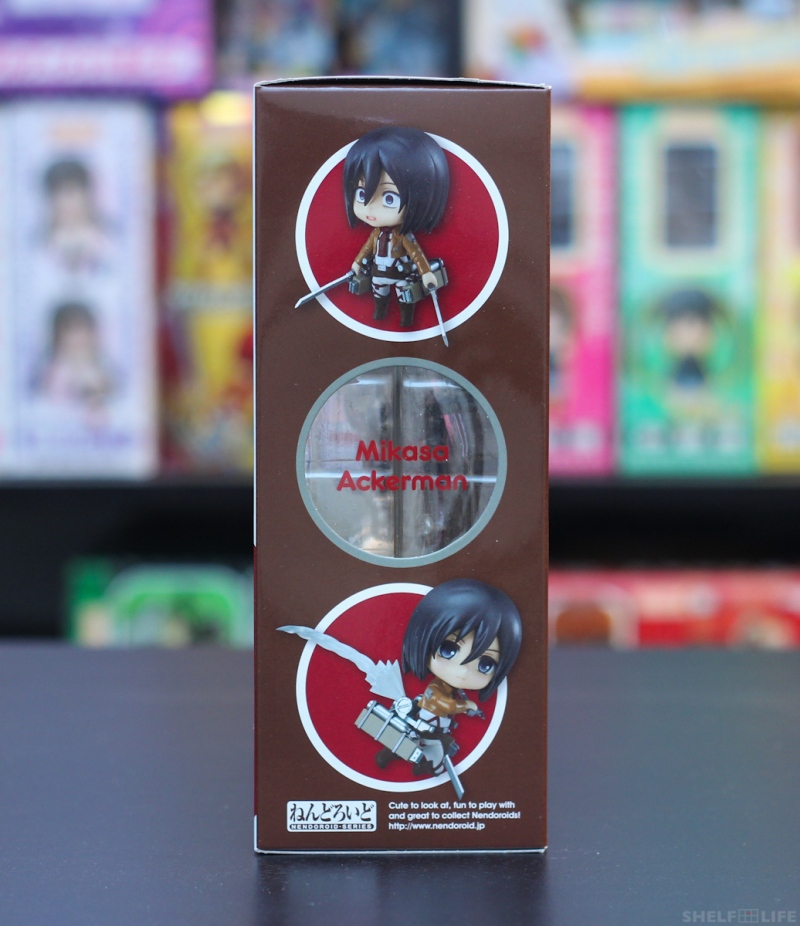 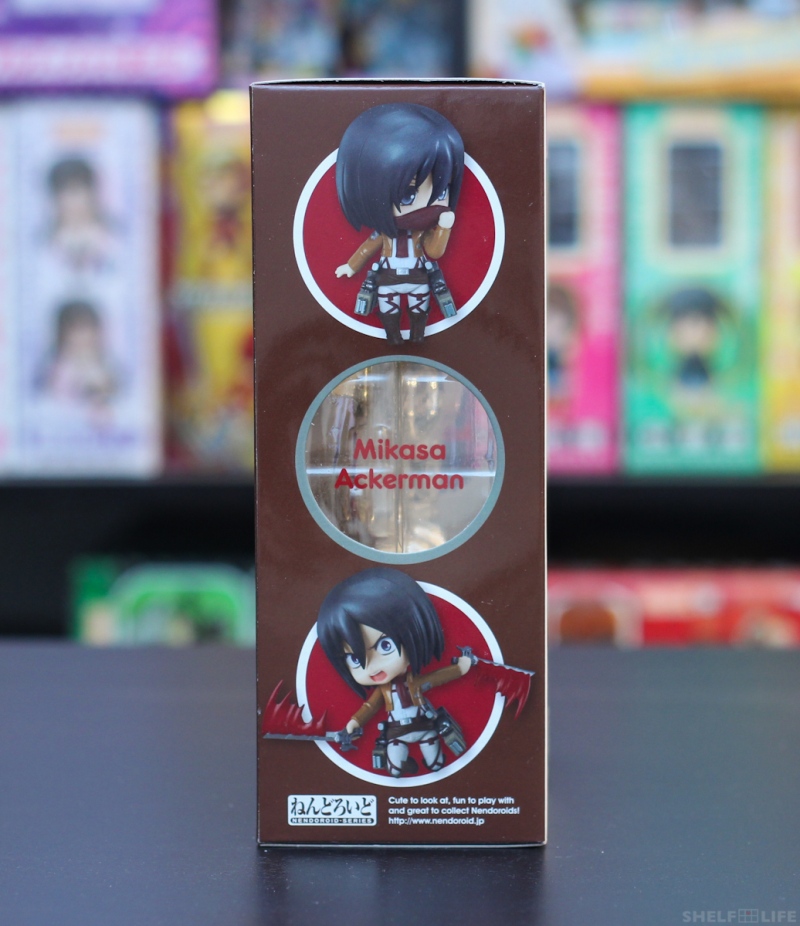 Mikasa’s blister and all her optional parts~
Mikasa comes with quite a few accessories, including two extra expressions, the gas canister and sheath equipment unit for her 3D maneuver gear, dual blades, effects parts to show her being propelled forward, effects for her blades, three bent arms, two bent legs, two fists, and two special hands for holding the dual blades. 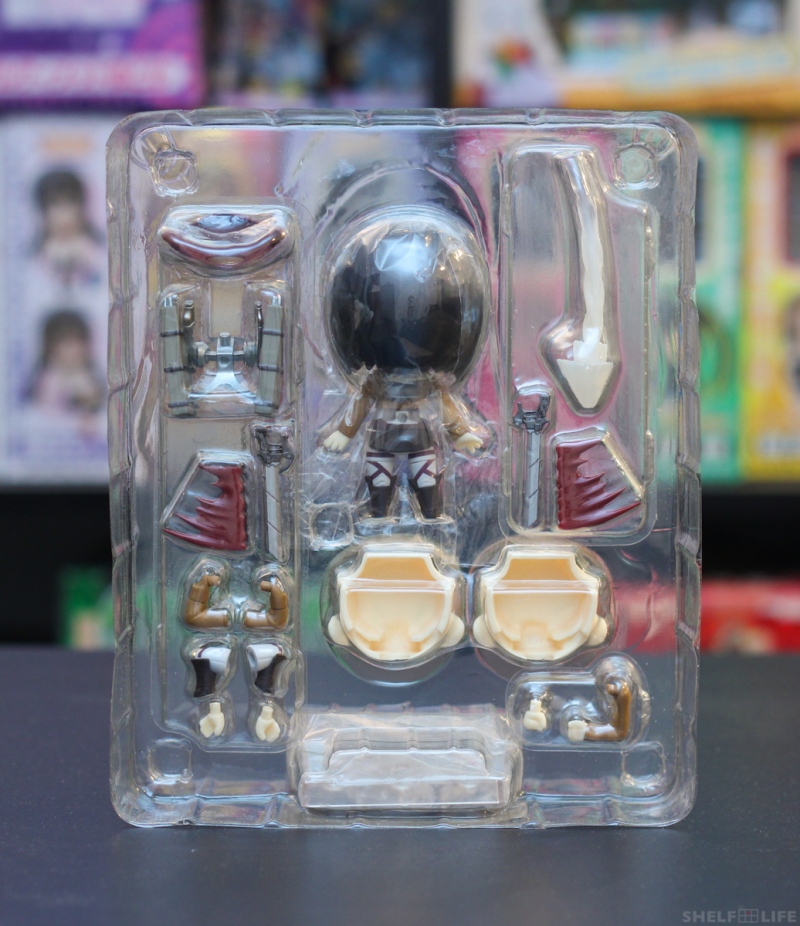 Mikasa uses the standard square-based arm stand, although her arm is a little longer than your standard Nendoroid’s, allowing her to be posed in mid-air. She comes with a bent bit to use with her 3D maneuver gear equipment, an extra neck joint, and a special attachment piece for backdrops. 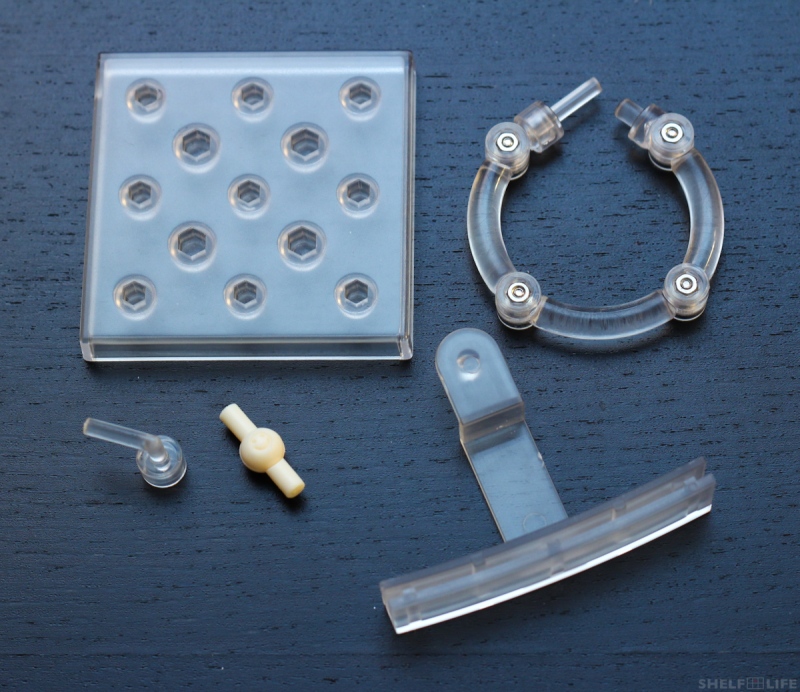 I chose not to use the backdrop attachment, but in case you were wondering, here are the instructions on how to use it. It looks like it attaches to the square base, and you can slip something into the attachment itself. 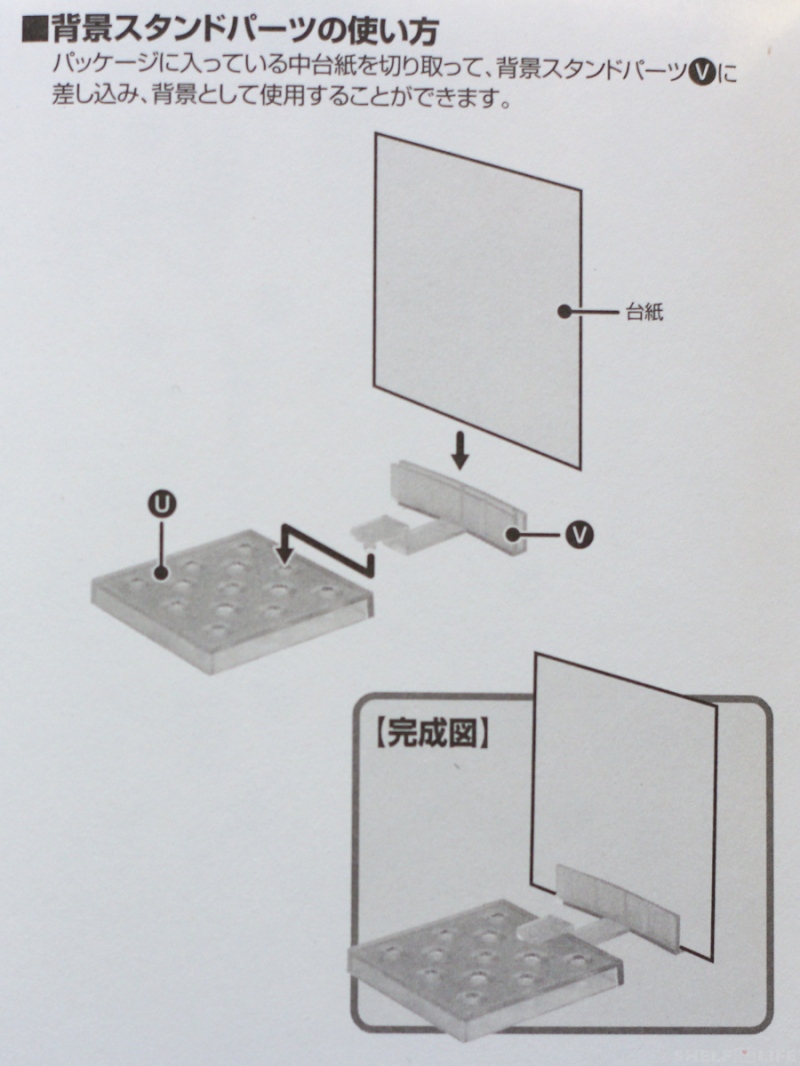 A closer look at Mikasa (ᅌᴗᅌ* )
Mikasa looks like this from all four sides straight from the box. She’s wearing the Training Corps uniform with the body harness from her 3D maneuver gear. She’s also wearing her signature scarf. The badges on her jacket are really nicely detailed, but the I found the paint job on her harness was done rather poorly, especially at the back.

Compared to the pictures on the box, a part of her harness on her upper thigh seems to be missing. It looks like they’ve decided to take it out though, since the upcoming Eren and Levi Nendoroids don’t have it either. Her jacket is also no longer shiny like it was in the prototype. 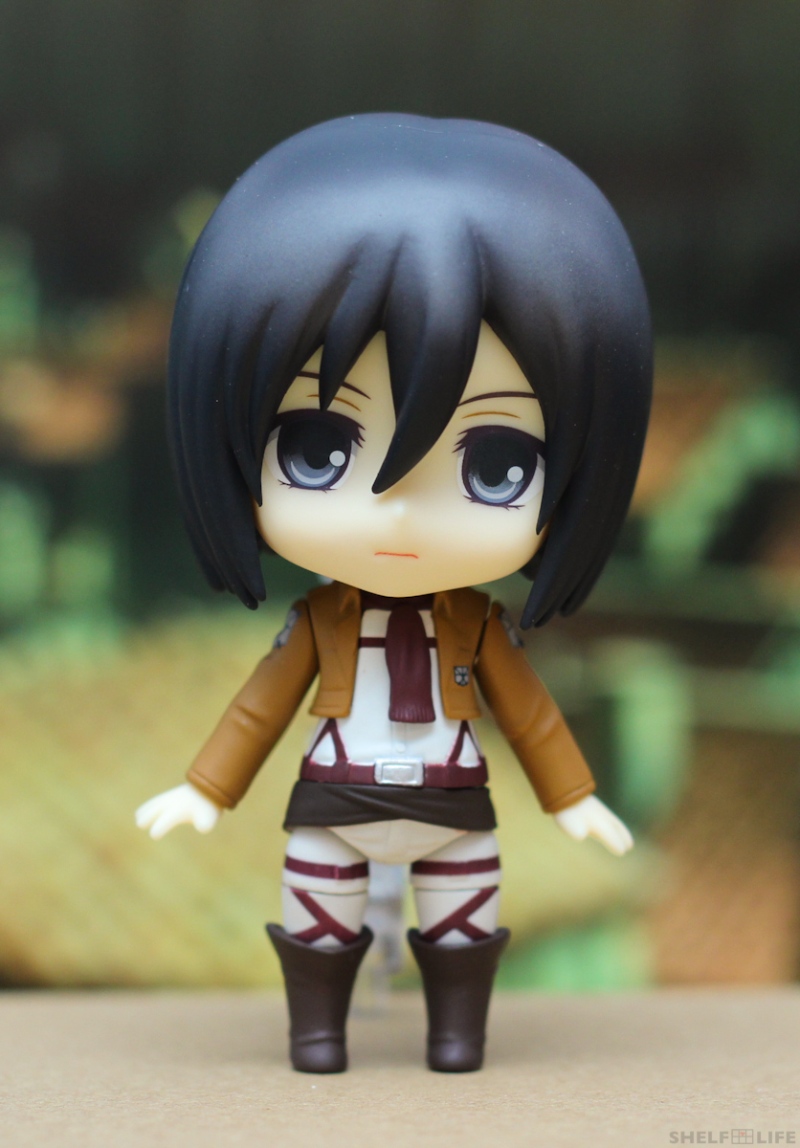 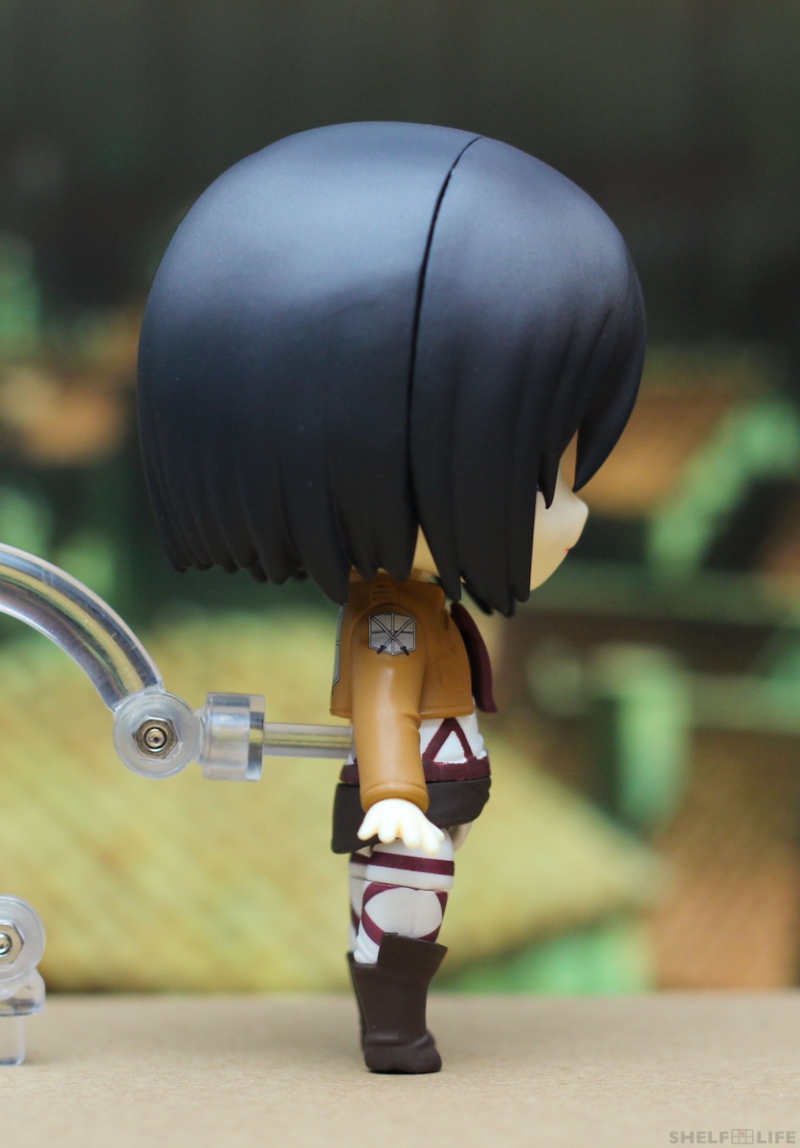 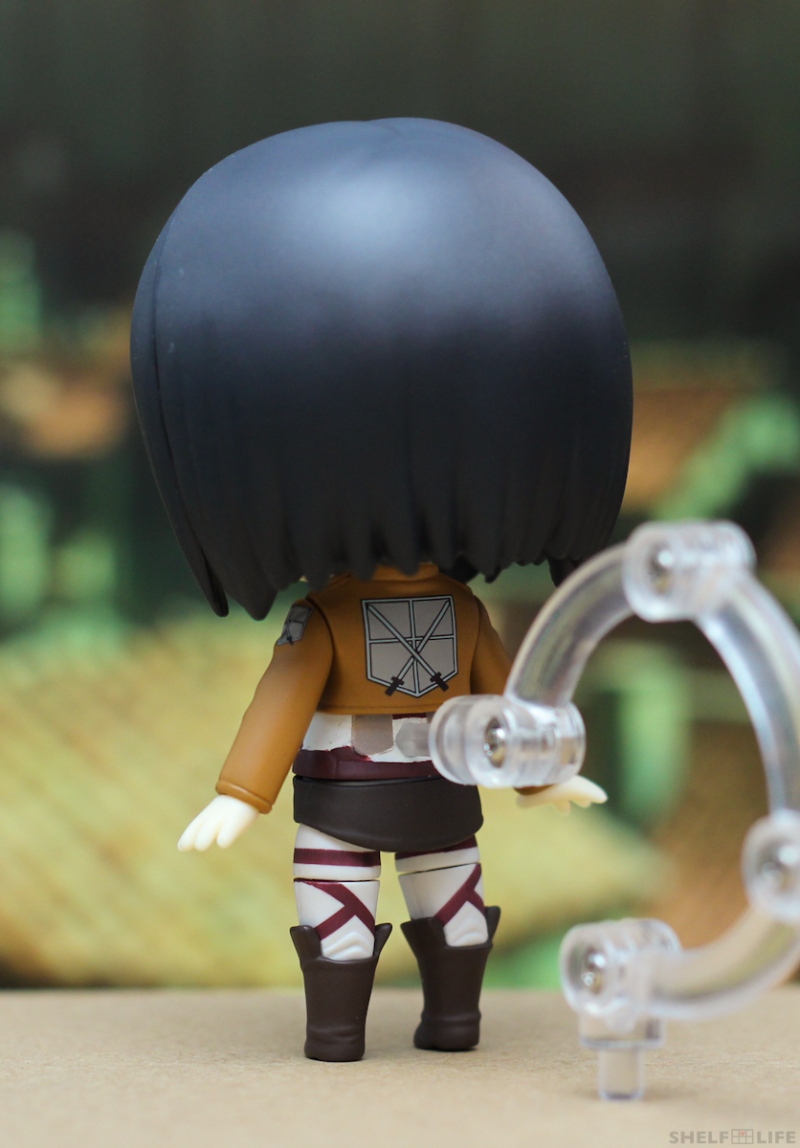 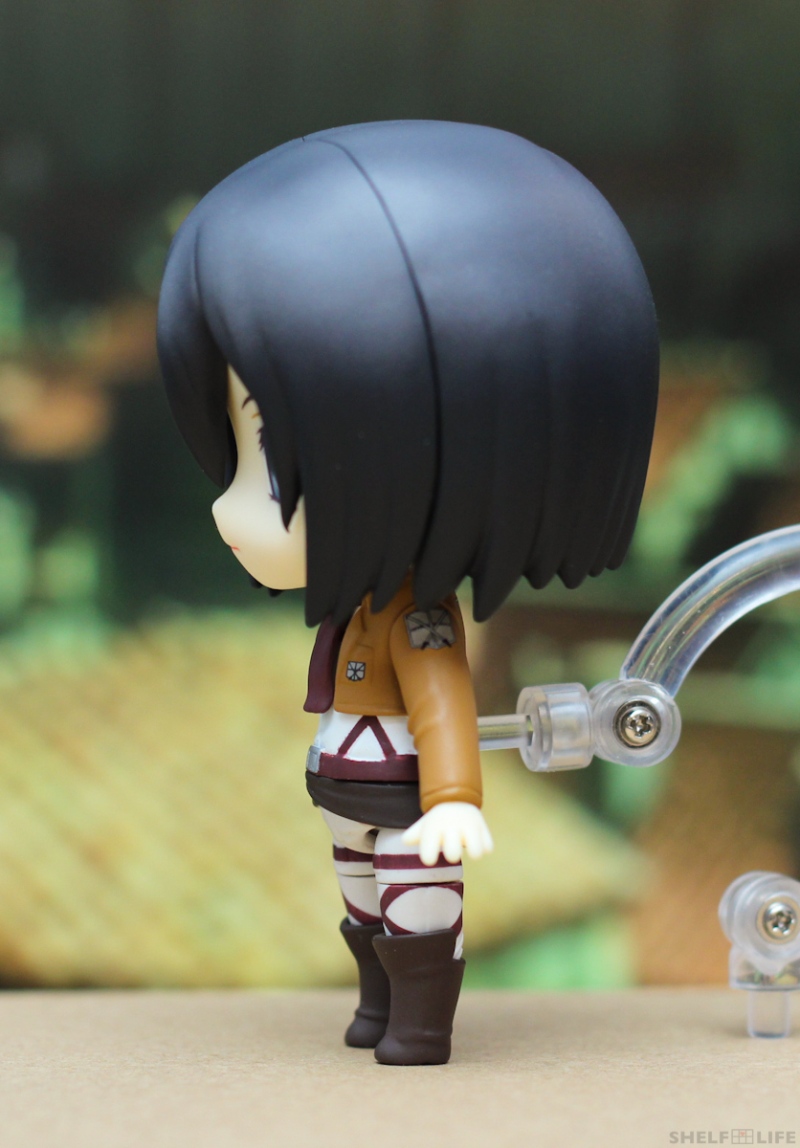 Mikasa has special leg joints (*ﾟﾛﾟ)
Mikasa has the typical neck, shoulder, wrist, and waist joints that are the same as a standard Nendoroid’s. Her scarf is also removable, so you can rotate it around the area where it connects. Her legs, though, are connected by a ball joint instead of the typical Nendoroid elbow joint, which allows for a little more movement than usual. The legs are also segmented into two at the upper thigh, basically letting her legs face any way you want them to. 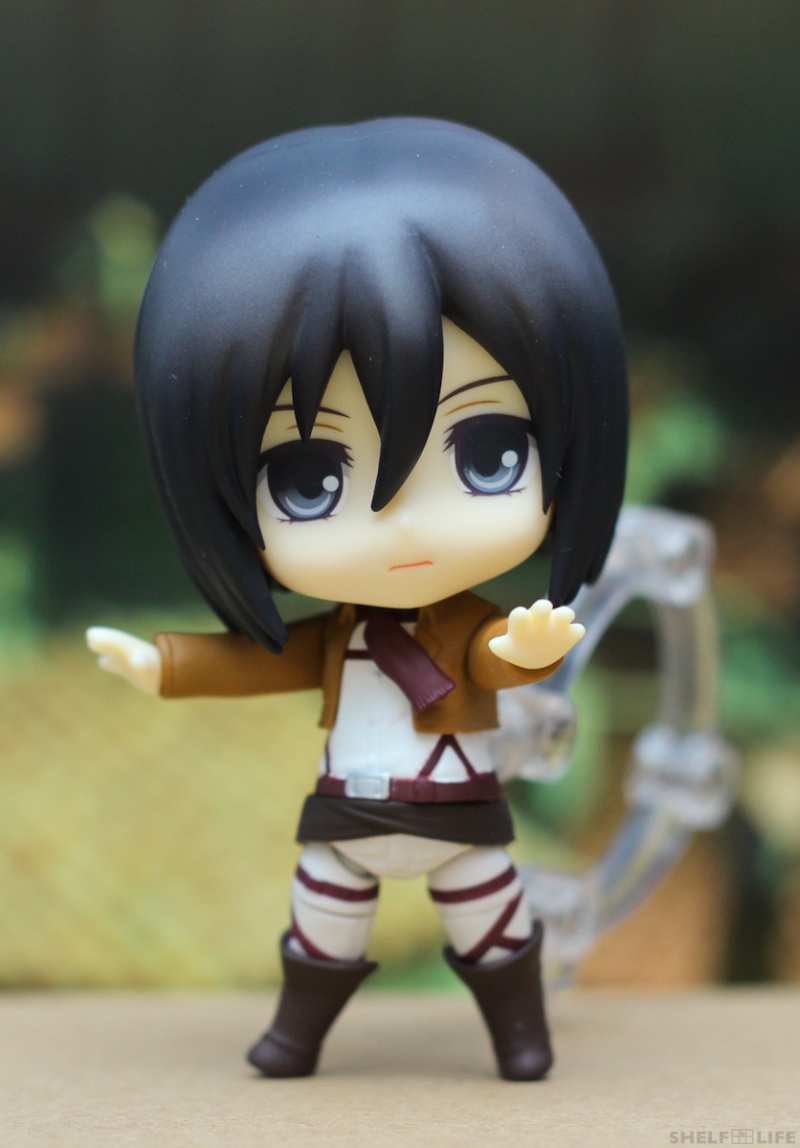 Now onto her extra parts~~

The first parts we’ll look at are her scarf and bent arms. Mikasa’s scarf is actually a precious gift from Eren, so she has it with her almost all the time. She comes with a part that you can add onto any of her expressions to replicate her wearing the scarf over her face.

It kind of makes her look like a bandit though, especially if you use it with her angry expression.

These bent arms are two of three extra arms that Mikasa comes with, but since they are segmented into two separate parts at the upper arm, it allows her to take on a lot more poses than you would initially think. 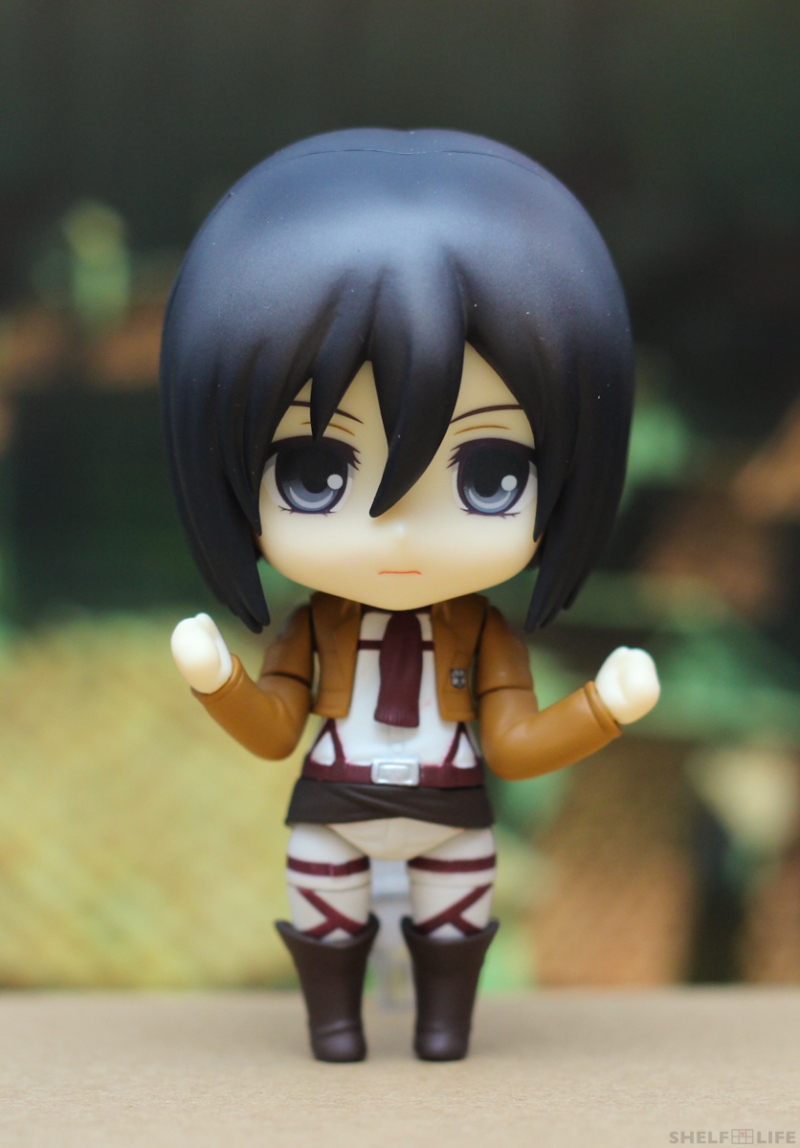 You can use the fists to make a shy Mikasa or pose in a close combat position, but I think the best pose you can make with the fists is the signature salute using the third bent arm. The only problem with this pose is that the hand on arm that goes behind her covers the hole on her back for her stand. You either have to rotate the arm out a bit or remove the hand entirely (which is what I did for this picture). 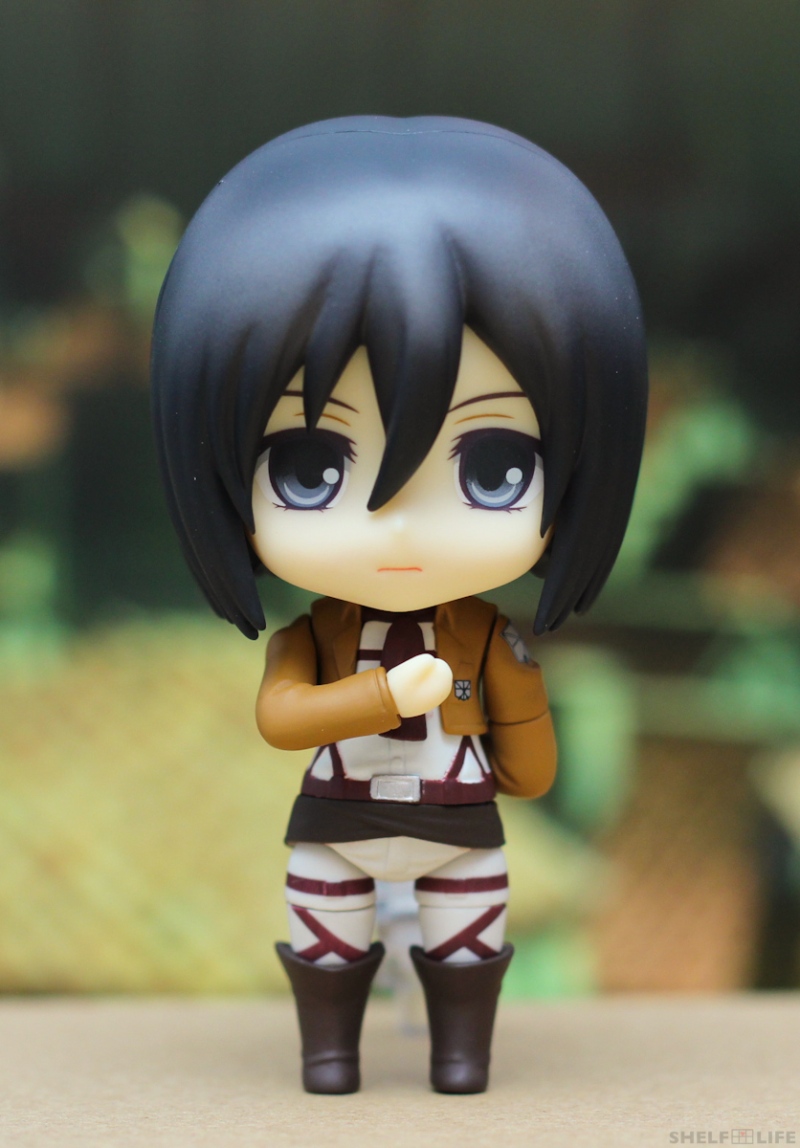 Onto the 3D Maneuver Gear Parts!

Some of the more exciting parts of this Nendoroid are definitely the 3D maneuver gear equipment, blades, and effects for recreating some more dynamic poses of Mikasa moving through the air or fighting a titan.

Here is the main part that attaches to Mikasa using the hole in her back. The gas canisters and extra blades are not removable from the main unit, and the Nendoroid does not come with any wires or grappling hooks unlike the figma. 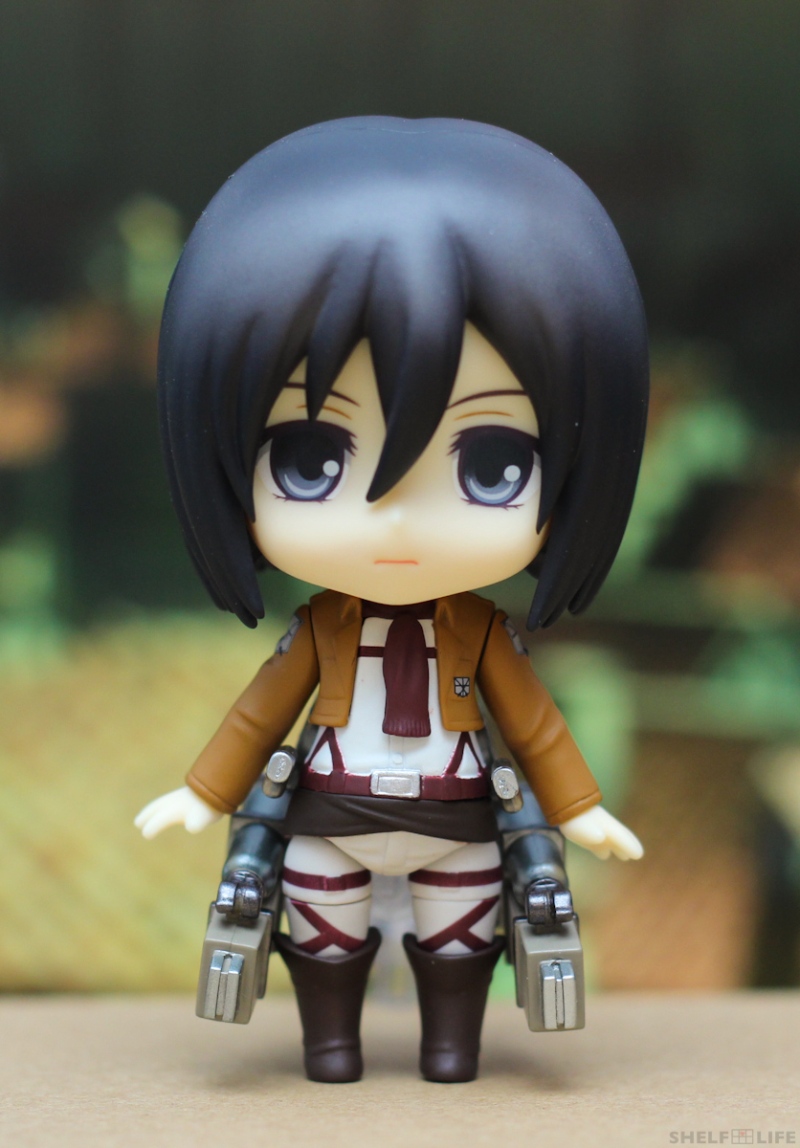 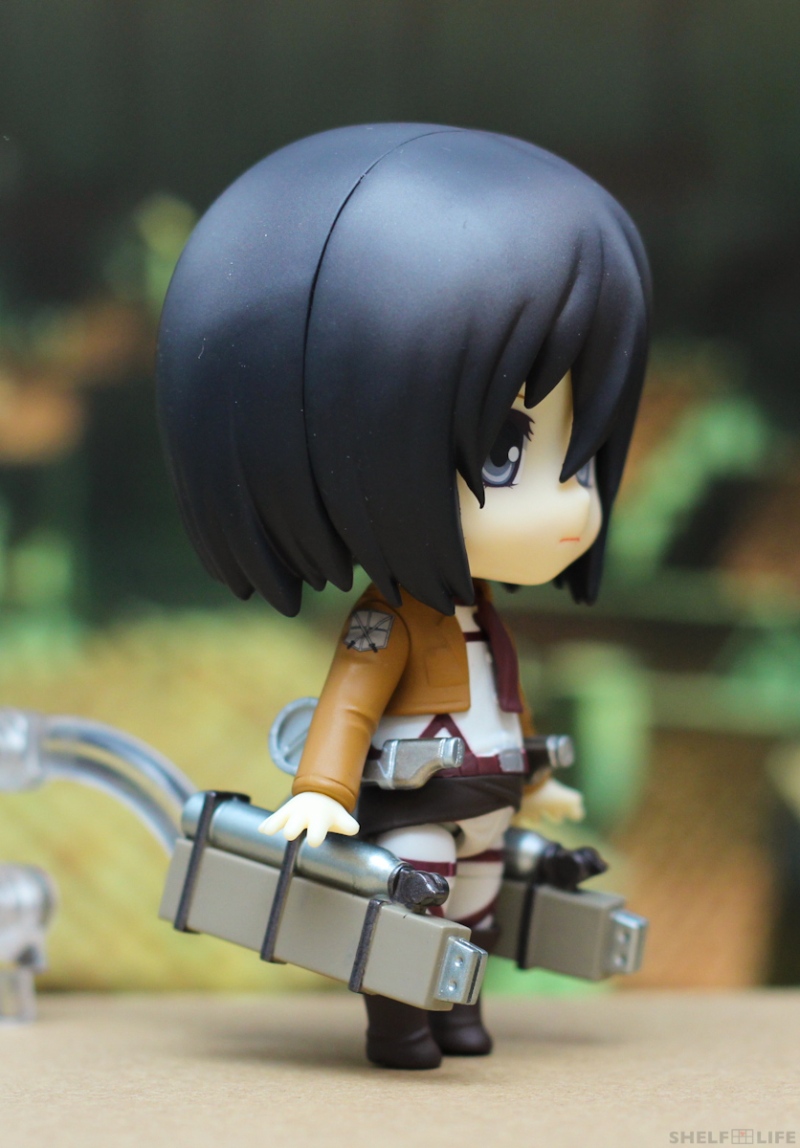 With the equipment on, the stand arm has to attach to the maneuver equipment using the special bent bit for the stand. 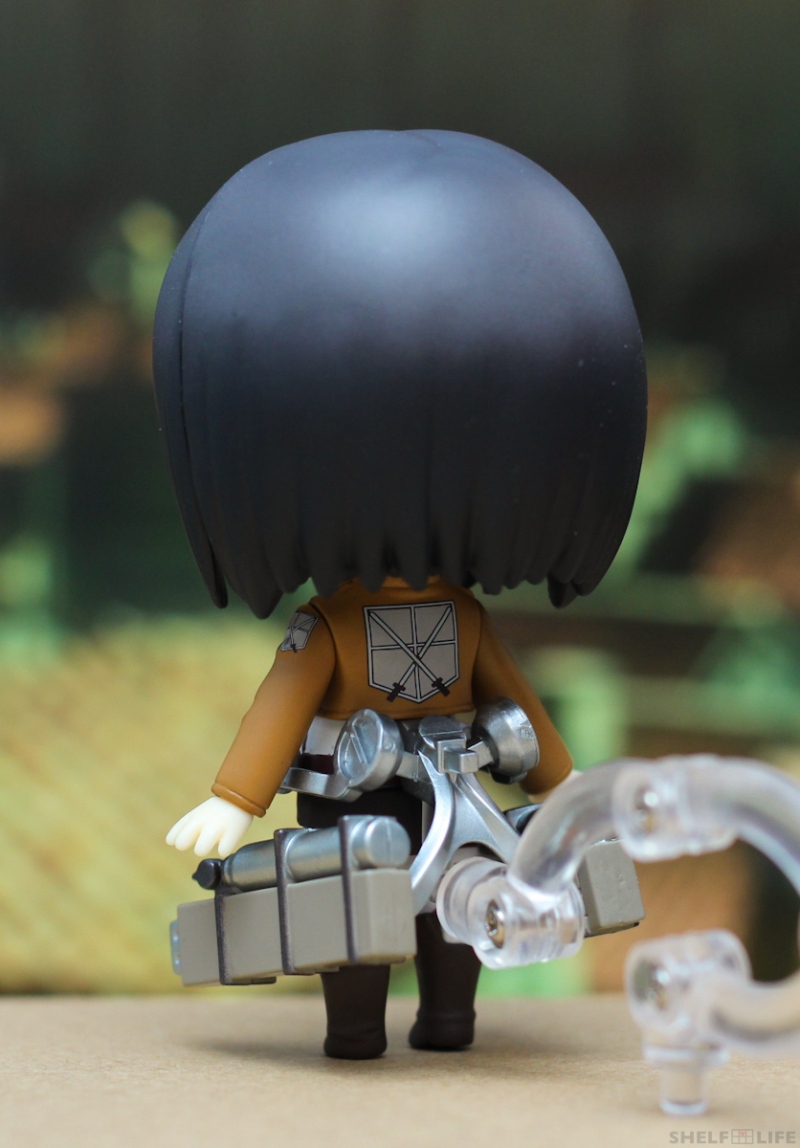 The sheaths and the gas canisters are attached to the fans and main device by a ball joint, so if you find that Mikasa doesn’t fit quite right into the equipment, you can adjust them. 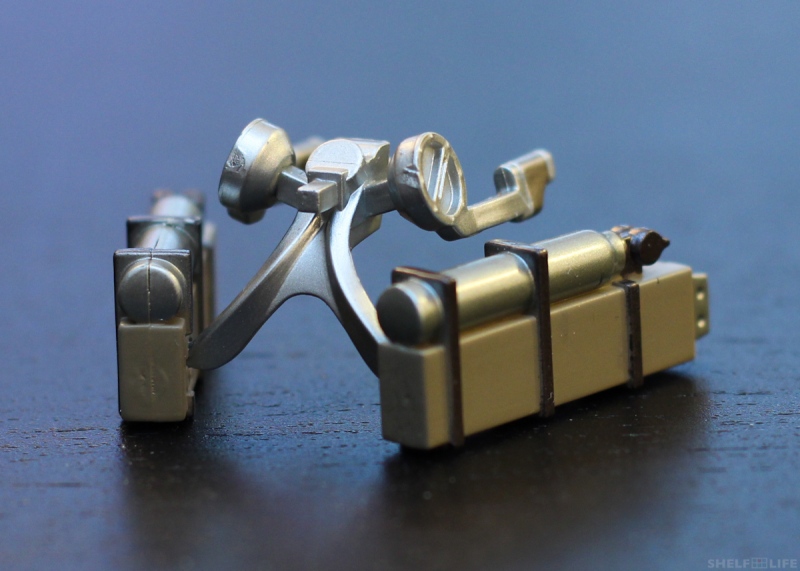 Of course, the 3D maneuver gear wouldn’t be complete without the operating devices and the blades attached to them. She comes with two special hands used for holding them.

I personally would’ve liked to see wires attaching the operating devices to the rest of the equipment. It also would’ve been cool if the blades could have been put inside the sheath, but I guess I’m asking too much for a Nendoroid. 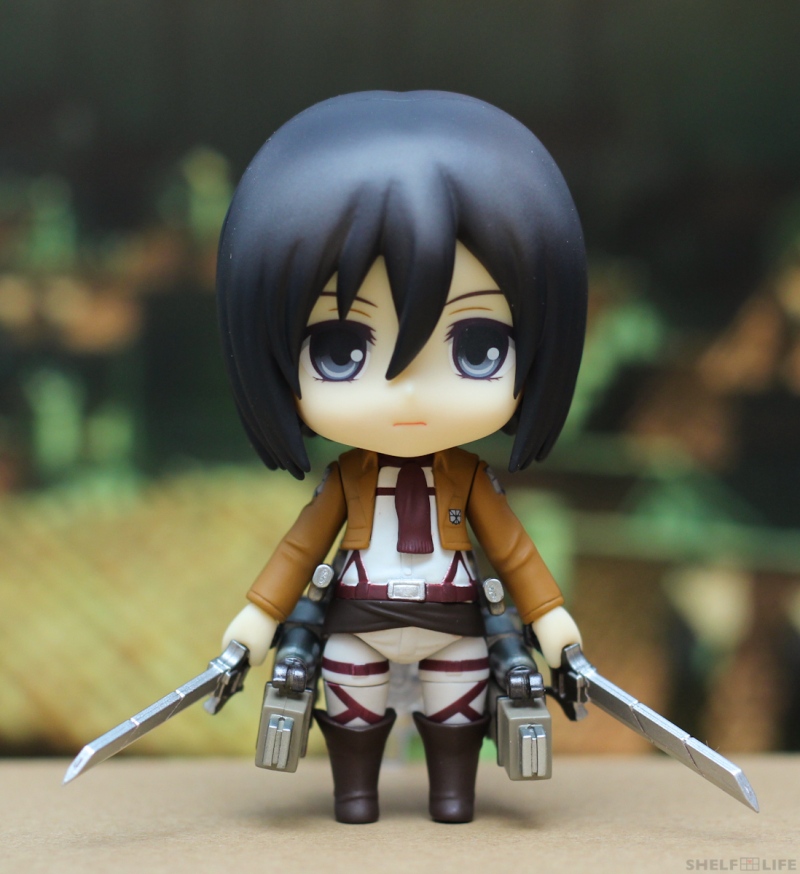 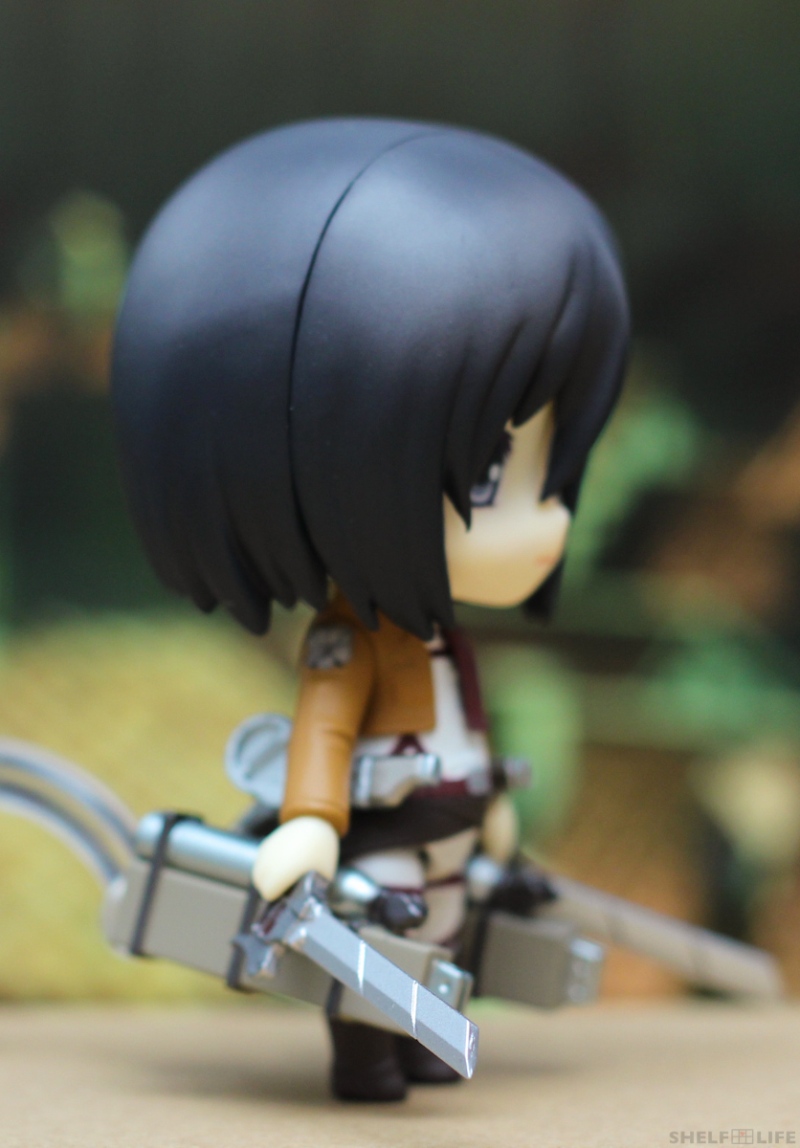 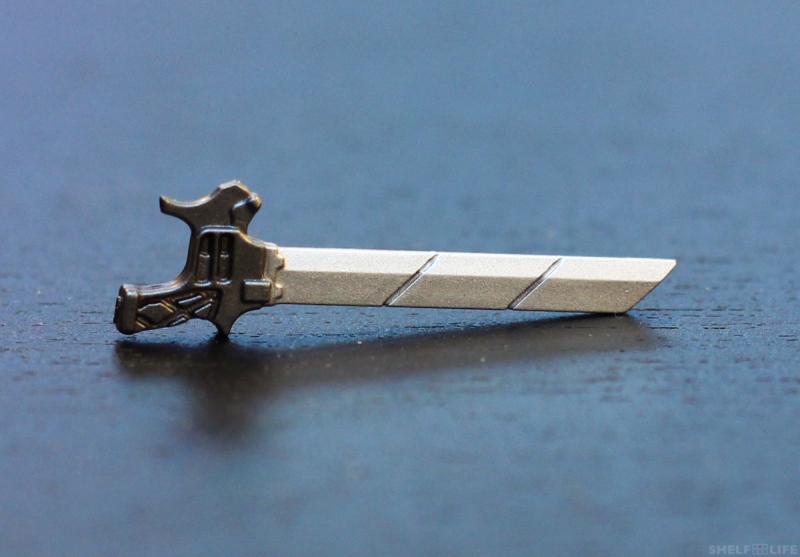 ε=ε=ε=(っ・＿・)っ
With the bent legs, you can pose Mikasa jumping and soaring across the rooftops of the Shiganshina District.

*I also realized too late that the bent legs in my blister were reversed, so I have used the bent legs on the wrong side in the following pictures… sorry about that in advance. 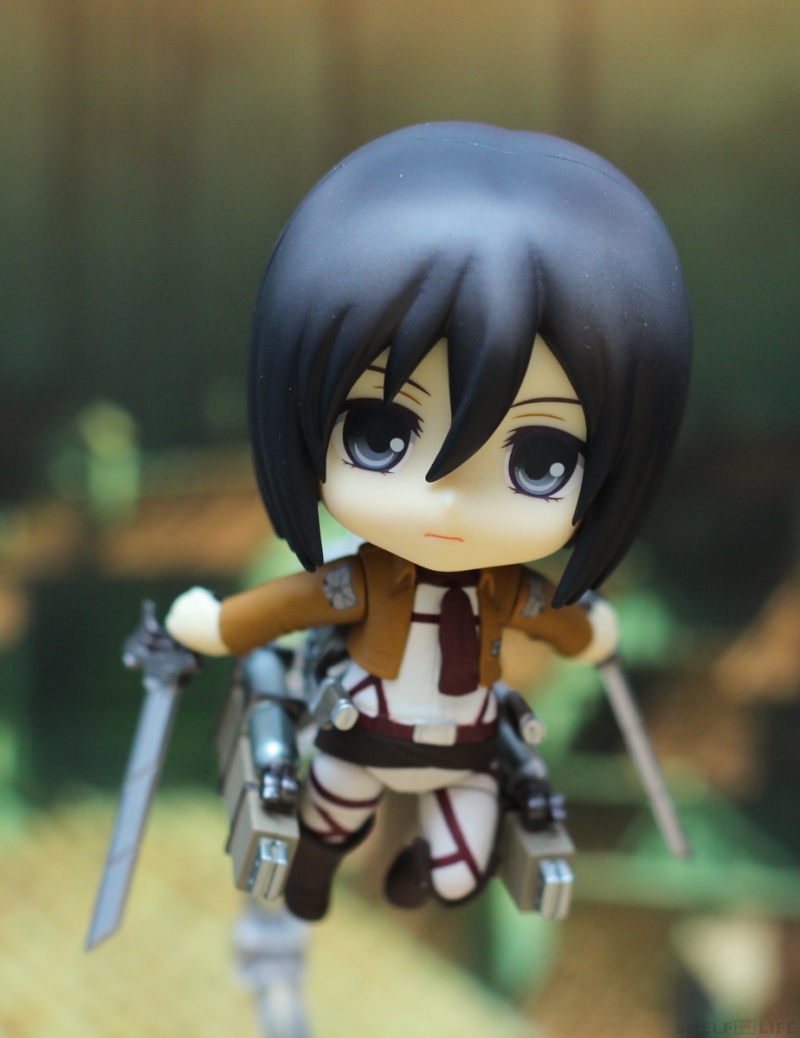 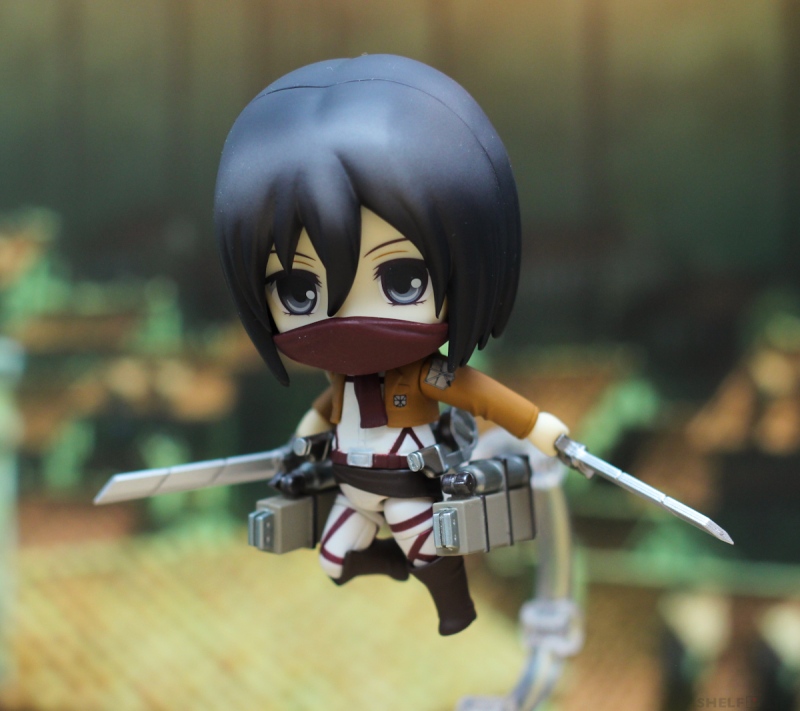 You can attach an effect part to the back of her equipment near her fans to make it look like she’s being propelled forward. The “tail” part of the effect rotates so you can use it to “change the direction” she’s coming from. 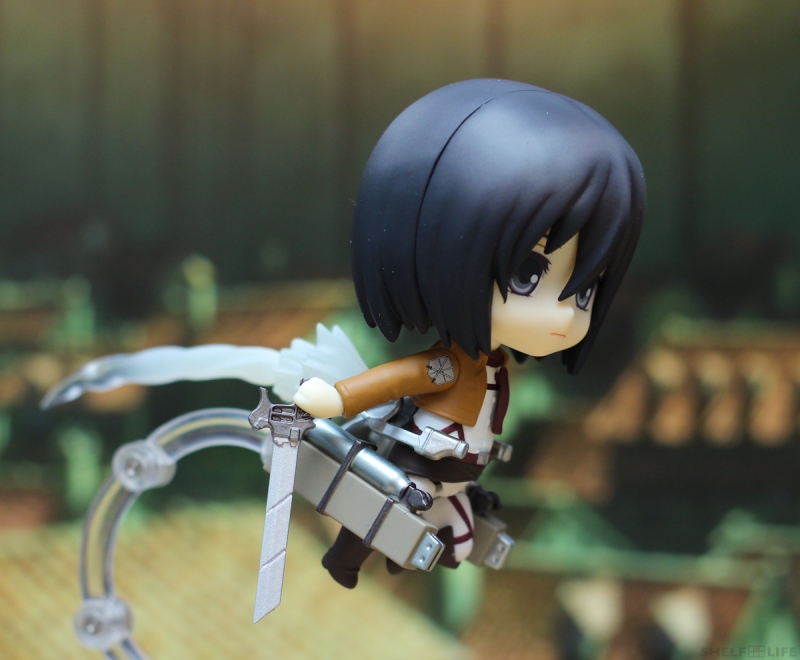 From what I remember, Mikasa has a pretty stoic expression most of the time, so this default expression suits her pretty well. But she is a Nendoroid after all, so Good Smile has given her two additional faceplates, an angry and a stunned expression.

( ÒДÓ)
Here is an angry Mikasa ready to strike down the next titan! 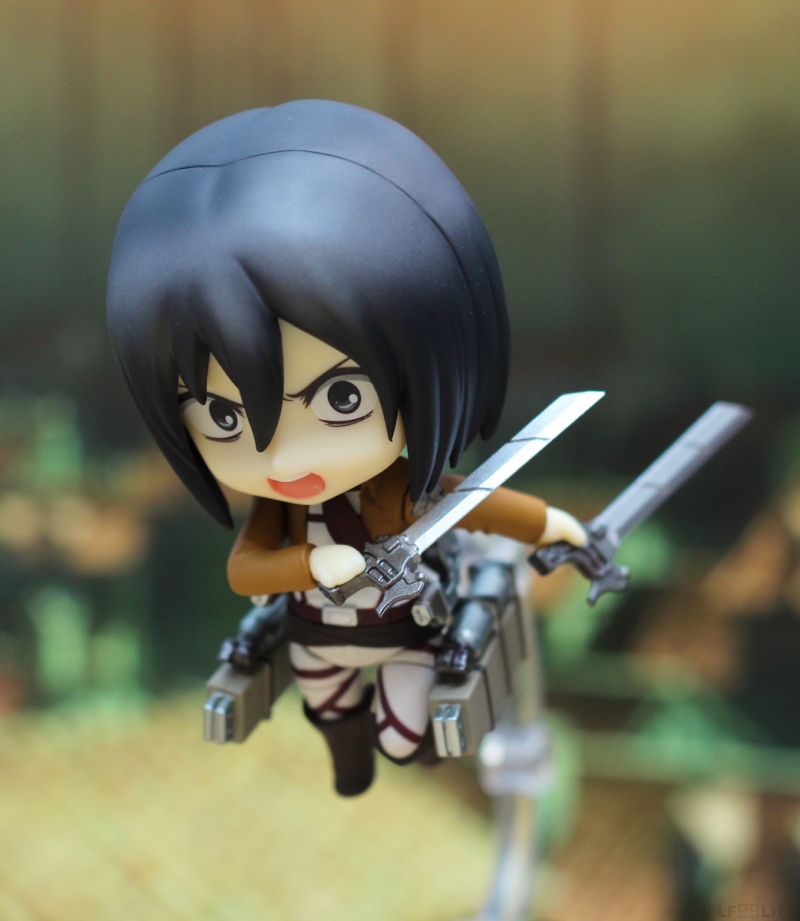 And here she is after killing it by striking it with her blades! She comes with two blood effects parts that clip onto the blades to make it look more dynamic. 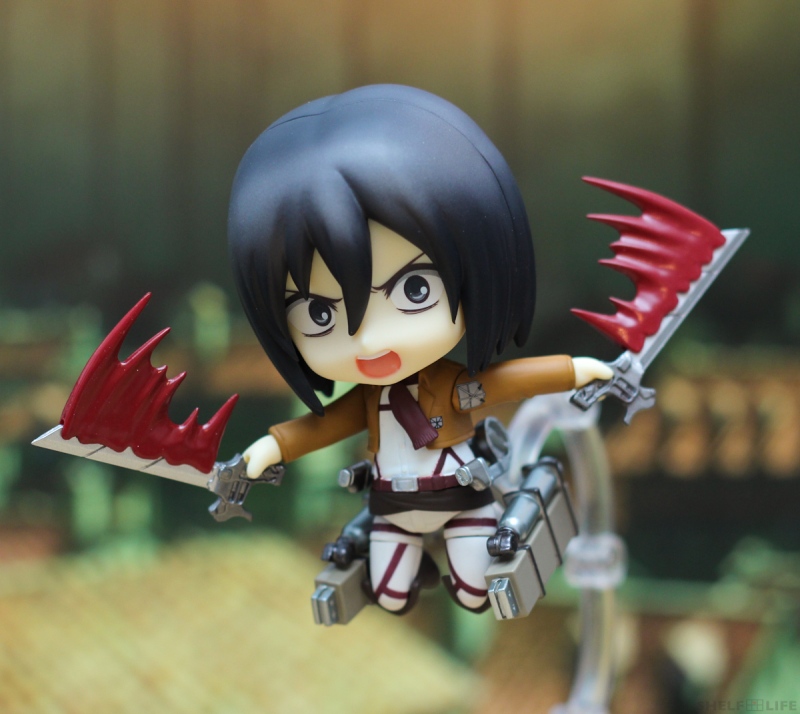 ( ꒪д꒪)
Lastly, this is Mikasa’s stunned expression for when she has lost all hope. I tried to get her legs in such a way that her butt would be on the ground, but I don’t think that is possible because of the leg joint.

Mikasa is the second Shingeki no Kyojin Nendoroid following the Colossal Titan Playset. I really enjoyed playing with her and trying to pose her in the air. She comes with a lot of options, and the segmented arms and legs do help increase the range of poses she can take on, but I still found it difficult to recreate a lot of the poses that I wanted to. That comes from the limitations of a Nendoroid though. I also found Mikasa’s expressions a little lackluster, but that’s also just her character. The paint job could have been done a bit better in my opinion, but overall, I think the sculpt and design of her accessories were done really well. I know this is Mikasa from her Training Corps days, but I do wish she also came with the Survey Corps cloak!

If you’re a Shingeki no Kyojin fan into Nendoroids, this might be something you want to pick up. Otherwise, I highly recommend checking out the Shingeki no Kyojin figmas also released by Good Smile Company. They’re much more articulate and detailed, and they just offer so much more in terms of options. 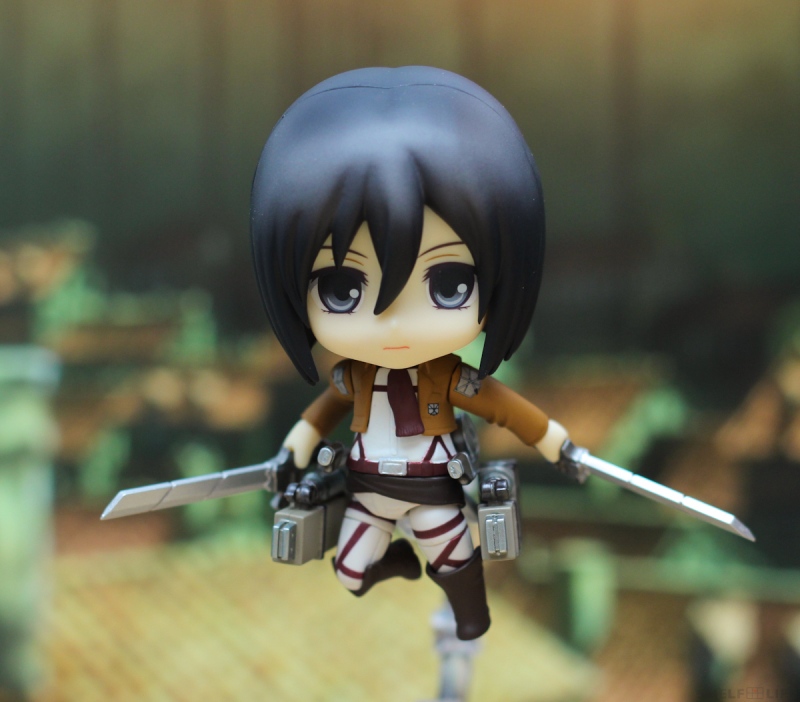 Anyway, that’s it for my review of Mikasa. If you have any questions or comments, please feel free to leave them below!